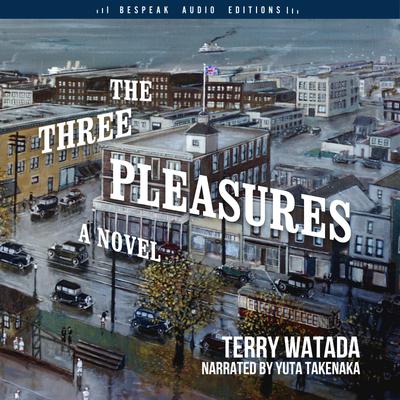 In 1940s Vancouver the Japanese have just bombed Pearl Harbour and racial tension is building. The RCMP are rounding up “suspicious” young men, fishing boats and property are being seized, and internment camps are only months away.

Daniel Sugiura, a young reporter for the New Canadian, the only Japanese-Canadian newspaper allowed to keep publishing during the war, reveals the stories of members of Vancouver’s Japanese community in the midst of war: Morii Etsuji, the Black Dragon boss, who controls the kind of pleasure men pay for — gambling, drink and prostitution; Watanabe Etsuo, Secretary of the Steveston Fishermen’s Association who makes a deal with the devil to save his loved ones; and Etsu Kaga, a Ganbariya of the Yamato Damashii Group and a Japanese nationalist whose obsession with the Emperor becomes destructive to himself and all involved with him.

The Three Pleasures is an intimate and passionate novel that takes a deep look at a terrifying and painful period in Canada’s history.

Bespeak Audio Editions brings Canadian voices to the world with audiobook editions of some of the country’s greatest works of literature, performed by Canadian actors.