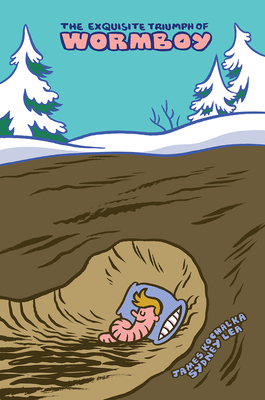 The Exquisite Triumph of Wormboy

In The Exquisite Triumph of Wormboy, multi-award winning illustrator and graphic novelist James Kochalka brings us a thematic collection of drawings that chronicle the exploits of a worm who embarks on an adventure of rescue, fueled by inescapable surges of bravery. This odyssey is aptly and expertly versified into an ekphrastic epic by former Vermont Poet Laureate Sydney Lea. Readers of all ages will be entertained by the sights, tension, suspense, and humor of this unique collection.

Yet here's a leaf And here's a boat
And here's the cure for the chill of doubt
Why should not hope, however odd,
Be just as strong, no, stronger than gods?

James Kochalka is the author and illustrator of more than forty graphic novels. He has won two Eisner Awards, one Harvey Award, and four Ignatz Awards. In 2011 he was named the first Cartoonist Laureate of Vermont. He also has a separate career as a rock star, performing with his band James Kochalka Superstar. In 2007, Rolling Stone named his song "Britney's Silver Can" one of the 100 Best Songs of the year.

Sydney Lea, founding editor of New England Review, is author of thirteen volumes of poetry, most recently Here (Four Way Books, 2019). A former Vermont Poet Laureate and a Pulitzer finalist, he has also published a novel, a collection of literary criticism, and four volumes of personal essays.