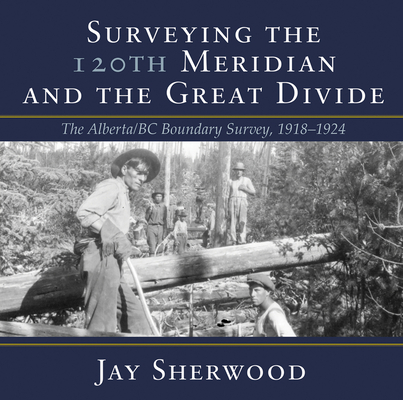 Surveying the 120th Meridian and the Great Divide

The Alberta/BC boundary survey was a unique Canadian project that combined talented surveyors, high-tech surveying equipment, rugged crew members and Canadian wilderness. This is a story of adventure and danger: the crew climbed mountains and surveyed from the peaks of the Canadian Rockies; slogged through the muskeg north of the Peace River; occasionally crossed rivers at high water; and often worked in the rain, snow or cold.

The boundary survey produced the first detailed maps of the terrain along the divide and the first pictures of the northern Canadian Rockies taken from an airplane. But the most important legacy of this project is the collection of approximately 5,000 photographs developed from high-quality glass plate negatives. These photographs provide full panoramas of the Rocky Mountain landscape as it looked over a century ago. Surveying the 120th Meridian and the Great Divide combines the best of these photographs, diary entries and government documents to recount the astonishing journey of the surveyors and their crew members as they explored Canada’s most dramatic landscape.

Praise For Surveying the 120th Meridian and the Great Divide: The Alberta/BC Boundary Survey, 1918–1924…

"Jay Sherwood has done another remarkable job of combing through the old records, diaries, and field notes to produce his second book on the surveying of the border between British Columbia and Alberta. Here, again, described in detail and in chronological order, are the trials and tribulations of the survey parties—led by the remarkable Chief Land Surveyors: A.O. Wheeler, R.W. Cautley, and H.F. Lambart—working from the top of the peaks of the Rocky Mountains to the flat muskeg swamps of the Peace River Country." — Robert Allen, British Columbia Land Surveyor (Life Member and Past President, Association of British Columbia Land Surveyors), Canada Lands Surveyor (Past President, Association of Canada Lands Surveyors) and Life Member Canada Institute of Geomatics