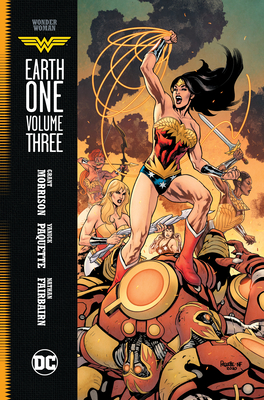 Diana, now queen of the Amazons, must assemble the disparate Amazonian tribes for the first time in a millennium. Max Lord's assault on Paradise Island with his destructive A.R.E.S. armors is on the horizon, and in order to weather the war that is coming, Wonder Woman will need the full might of her sisters by her side! Can Diana finally bring her message of peace to Man's World, or will Max Lord's war burn the world and the Amazons to ashes?

Continuing the tradition of the critically acclaimed Earth One tales that challenge the status quo of the comics industry, Wonder Woman: Earth One Vol. 3 is Grant Morrison and Yanick Paquette's final installment of this visionary and enterprising graphic novel series.

Writer Grant Morrison is known for his innovative work on comics from the graphic novel Batman: Arkham Asylum to acclaimed runs on Animal Man and Doom Patrol, as well as his subversive creator-owned titles such as The Invisibles, Seaguy, and WE3. Grant has written bestselling runs on JLA, Seven Soldiers of Victory, and New X-Men and helped to reinvent the DC Universe in The Multiversity, All-Star Superman, 52, Batman, Batman & Robin, and Batman Incorporated. More recently Grant has had his creator-owned series Happy! turned into a TV series on the Syfy network.

In his secret identity, Morrison is a "counterculture" spokesperson, a musician, an award-winning playwright, and a chaos magician. He is also the author of the New York Times bestseller Supergods, a groundbreaking psycho-historic mapping of the superhero as a cultural organism. He divides his time between his homes in Los Angeles and Scotland.