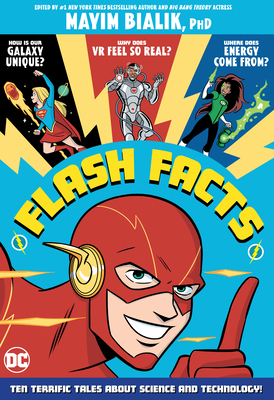 Have you ever wondered: What's at the bottom of the sea? Why does polar ice melt? Which tools does a forensics team use to solve a crime?

Well, look no further! Everyone's favorite Scarlet Speedster is here to answer all your burning questions! Barry Allen, with the help of some of his close friends, will take readers on an exciting journey that examines everything from the vast expanse of our galaxy to the smallest living organism known to man.

Curated by award-winning actress and author Mayim Bialik, Ph.D., and featuring stories created by an all-star cast of writers and illustrators, this anthology aligns with Next Generation Science Standards and provides a helpful bridge between the lessons taught inside the classroom and how the things we are learning affect our everyday lives.

Mayim Hoya Bialik is best known for portraying Bette Midler as a child in Beaches as well as her subsequent lead role as Blossom Russo in the early-1990s NBC television sitcom Blossom. Bialik most recently appeared regularly on the #1 comedy in America, CBS's The Big Bang Theory, playing neurobiologist Amy Farrah Fowler, a role for which she has been a four-time nominee for an Emmy and two-time winner of the Critics' Choice Award. She will star in an upcoming multi-camera sitcom, Call Me Kat, airing on FOX in fall 2020. Bialik earned a B.S. from UCLA in 2000 in neuroscience and Hebrew & Jewish studies, and a Ph.D. in neuroscience, also from UCLA, in 2007. Her book about attachment parenting, Beyond the Sling, was published in March 2012 (Simon and Schuster). Her vegan cookbook, Mayim's Vegan Table, was
published by Da Capo Press in spring of 2014. Bialik also has two New York Times bestsellers with Girling Up: How to Be Strong, Smart and Spectacular (Philomel Books, 2017) and Boying Up: How to Be Brave, Bold and Brilliant (Philomel Books, 2018).
Loading...
or support indie stores by buying on