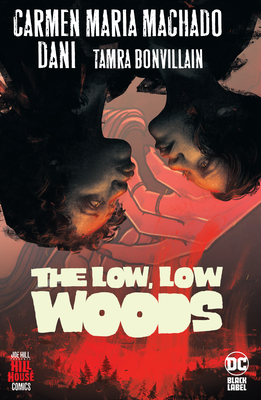 From New York Times bestselling author Carmen Maria Machado (Her Body And Other Parties, In The Dream House) comes a story so horrifying you won't dare to forget!

There's something in the woods...

Shudder-to-Think, Pennsylvania, has been on fire for years. The woods are full of rabbits with human eyes, a deer woman who stalks hungry girls, and swaths of skinless men. And the people of Shudder-to-Think? Well, they're not doing so well either.

When El and Octavia wake up in a movie theater with no memory of the last few hours of their lives, the two teenage dirtbags embark on a horrifying journey to uncover the truth about the strange town that they call home.

From critically acclaimed writer Carmen Maria Machado (Her Body and Other Parties) comes The Low, Low Woods, from the smash-hit lineup of the Hill House Comics library. Featuring stunning artwork by Dani (Lucifer), this volume collects The Low, Low Woods #1-6.

“…a thought provoking, eerie, and well-timed look at how misogyny and the desire to hide it can be damaging to everyone. Readers who enjoy the more psychological aspects of horror will want to read this over and over again.”—Booklist (Starred Review)


“…a gloriously unnerving tale of monsters, sinkholes, witches, and yearning teenage dreams. Within the horror plot lives a touching tale of friendship, choices, grief, and empowering rage, with a female-centered queer and diverse cast of characters.” —Publishers Weekly (Starred Review)

Carmen Maria Machado is the author of the memoir In the Dream House and the short story collection Her Body and Other Parties. She has been a finalist for the National Book Award and the winner of the Bard Fiction Prize, the Lambda Literary Award for Lesbian Fiction, the Brooklyn Public Library Literature Prize, the Shirley Jackson Award, and the National Book Critics Circle's John Leonard Prize. In 2018 the New York Times listed Her Body and Other Parties as a member of "The New Vanguard," one of "15 remarkable books by women that are shaping the way we read and write fiction in the 21st century."

Her essays, fiction, and criticism have appeared in the New Yorker, the New York Times, Granta, Harper's Bazaar, Tin House, VQR, Conjunctions, McSweeney's Quarterly Concern, The Believer, Guernica, Best American Science Fiction & Fantasy, Best American Nonrequired Reading, and elsewhere. She holds an MFA from the Iowa Writers' Workshop and has been awarded fellowships and residencies from the Guggenheim Foundation, Michener-Copernicus Foundation, Elizabeth George Foundation, CINTAS Foundation, Yaddo, Hedgebrook, and the Millay Colony for the Arts. She is the Writer in Residence at the University of Pennsylvania and lives in Philadelphia with her wife.