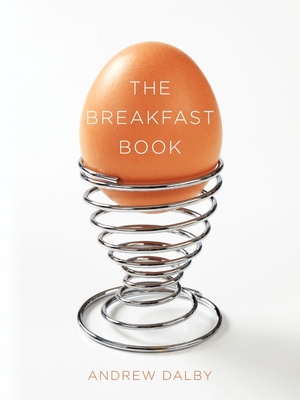 You’ve heard it from doctors, nutritionists, and your mom: breakfast is the most important meal of the day. It’s also one of the most diverse, varying greatly from family to family and region to region, even while individuals tend to eat the same thing every day. While Americans traditionally like to chow down on eggs, cereal, and doughnuts, the Japanese eat rice and miso soup, and New Zealanders enjoy porridge. But while we know bacon and sausage links belong alongside pancakes and waffles in the early morning hours, we don’t know how breakfast came to be. Taking a multifaceted approach to the story of the morning meal, The Breakfast Book collects narratives of breakfast in an attempt to pin down the mottled history of eating in the A.M. In search of what people have thought and written—and tasted—about breakfast, Andrew Dalby traces the meal’s origins back to the Neolithic revolution. He follows the trail of toast crumbs from the ancient Near East and classical Greece to modern Europe and across the globe, rediscovering stories of breakfast in three thousand years of fiction, memoirs, and art. Using a multitude of entertaining breakfast facts, anecdotes, and images, he reveals why breakfast is so often the backdrop for unexpected meetings, why so many people eat breakfast out, and why this often silent meal is also so reassuring. Featuring a selection of historic and contemporary breakfast recipes from around the world, The Breakfast Book is the first book to explore the history of this inimitable meal and will make an ideal morning companion to crumpets, deviled kidneys, and spanakopita alike.

Praise For The Breakfast Book…

“Dalby’s erudite approach will appeal to anyone who takes seriously this oft-neglected repast.”
— Booklist

“To dip into this compendium is to be forcefully and happily reminded that breakfast, the full English or otherwise, should be the best meal of the day. . . . The art is handsomely reproduced. . . . Between us, I’d say that anyone as obsessed with the idea of breakfast as Dalby should be locked up. But he has nevertheless written a marvelously toothsome compendium.”
— Literary Review

“Breakfast is the most important meal of the day, so they say—and it will seem even more so after reading The Breakfast Book. Part cultural history, part recipe book, it traces the origins of the meal in Neolithic times and explores different traditions around the world today.”
— Elle Decoration

“In this volume, Dalby, a historian and translator, presents a flurry of literary examples, mostly European, to prove the varieties of breakfast across time; from Homer to Cervantes, from Lawrence to Steinbeck. . . . The book also presents a wonderful sampling of breakfasting around the world today, such as how they breakfast on churros in Spain or anise-flavored ground cereal in Libya.”
— Publishers Weekly

“It’s impossible to read this book without feeling amused, edified and hungry. It has certainly convinced me that breakfast is the best meal of the day.”
— Paul Levy

Andrew Dalby is a linguist, translator and historian based in France. He is the author of many books including Bacchus: A Biography, Flavours of Byzantium, Food in the Ancient World from A to Z, and Dangerous Tastes: The Story of Spices, which was named Food Book of the Year by the Guild of Food Writers.