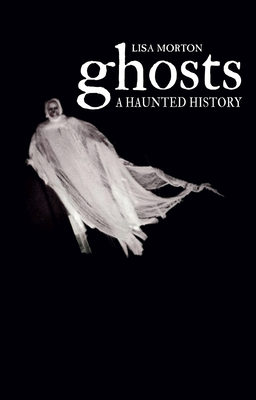 From that cheerful puff of smoke known as Casper to the hunkiest potter living or dead, Sam Wheat, there is probably no more iconic entity in supernatural history than the ghost. And these are just recent examples. From the earliest writings such as the Epic of Gilgamesh to today’s ghost-hunting reality TV shows, ghosts have chilled the air of nearly every era and every culture in human history. In this book, Lisa Morton uses her scholarly prowess—more powerful than any proton pack—to wrangle together history’s most enduring ghosts into an entertaining and comprehensive look at what otherwise seems to always evade our eyes.

Tracing the ghost’s constantly shifting contours, Morton asks the most direct question—What exactly is a ghost?—and examines related entities such as poltergeists, wraiths, and revenants. She asks how a ghost is related to a soul, and she outlines all the different kinds of ghosts there are. To do so, she visits the spirits of the classical world, including the five-part Egyptian soul and the first haunted-house, conceived in the Roman playwright Plautus’s comedy, Mostellaria. She confronts us with the frightening phantoms of the Middle Ages—who could incinerate priests and devour children—and reminds us of the nineteenth-century rise of Spiritualism, a religion essentially devoted to ghosts. She visits with the Indian bhuta and goes to the Hungry Ghost Festival in China, and of course she spends time in Mexico, where ghosts have a particularly strong grip on belief and culture. Along the way she gathers the ectoplasmic residues seeping from books and film reels, from the Gothic novel The Castle of Otranto to the 2007 blockbuster Paranormal Activity, from the stories of Ann Radcliffe to those of Stephen King.

Wide-ranging, informative, and slicked with over fifty unearthly images, Ghosts is an entertaining read of a cultural phenomenon that will delight anyone, whether they believe in ghosts or not.

Praise For Ghosts: A Haunted History…

“Morton’s brisk, handsomely illustrated Ghosts: A Haunted History canters through millennia of supposed uncanny interruptions with a kind of puckish skepticism. . . . Morton excels at presenting us with instances of the persistence of belief, across all times and cultures. . . . there are moments all the same when the hint of something truly uncanny is permitted to intrude.”
— Times Literary Supplement

“Halloween isn’t the only time for ghosts and ghost stories. . . . Lisa Morton offers a compact account of the human propensity to believe in otherworldly apparitions. She discusses, among other matters, haunted houses, spiritualism, ghost-hunting, ‘Day of the Dead’ and spectral terrors in literature, film and popular culture. To give body and shape to these phantoms and airy nothings, Morton packs her book with images—of paintings, creepy spirit photographs, movie stills and even a full-page illustration of Casper the Friendly Ghost. . . . abounds with phantasmic lore of every kind. . . . reminds us that it’s when the days are shortest and the nights darkest that we most need warmth and light and family. Paradoxically, it’s at this same time of the year, and under just those cozy conditions, that we most enjoy spooky stories. ‘There was a man dwelt by a churchyard,’ whispers a character in Shakespeare’s The Winter’s Tale and then breaks off. No matter. People have been imagining, and telling, what happened next ever since.”
— Washington Post

“Ghosts is intelligent and well structured. It’s also well informed, which is apparent in the sheer volume of spectral examples that Morton has collected, yet her writing style remains accessible. . . . The perfect companion for those who err towards skepticism over embellishment yet still find themselves riddled in goose-pimples when they hear a creak in the floorboards in the dead of night.”
— Rue Morgue

“This year’s Halloween has passed, but for many the interest in things that go bump in the night is alive and well. From classic ghost stories told around a campfire to the slew of recent ghost hunting TV shows, ghosts have been the most prevalent otherworldly beings around for years. Luckily for those of us who love a good ghost story, Morton has written the ultimate guide on the shadowy superstars of the supernatural realm.”
— PopMatters

"As Morton shows in this spine-tingling study, belief in ghosts is nearly universal, though the form taken by the 'undead spirit' varies across time and space."
— Guardian

“Morton’s admirably cool and dispassionate summary incorporates an astonishing range of reference, covering phantoms, spirits, and wraiths worldwide, including the Chinese Hungry Ghost Festival, the Japanese holiday known as Obon (during which families leave food for wandering souls), the Dia de los Muertos in Mexico, and the various ghosts and legends of Brazil, Africa, Australia and India. The book’s geographical scope is matched by its historical sweep, which begins with a discussion of the edimmu of ancient Mesopotamia and the various spirits of the classical world, and continues all the way through the Middle Ages, to nineteenth-century spiritualism and beyond.”
— Spectator

Lisa Morton is an award-winning author and one of the world’s leading authorities on Halloween. Her work includes The Halloween Encyclopedia and A Hallowe’en Anthology: Literary and Historical Writings Over the Centuries.
Loading...
or
Not Currently Available for Direct Purchase