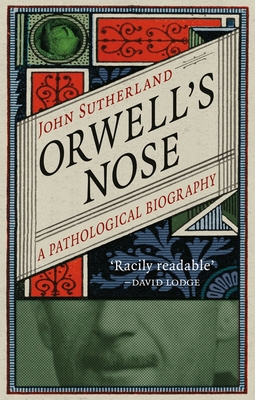 In 2012 writer John Sutherland permanently lost his sense of smell. At about the same time, he embarked on a rereading of George Orwell and—still coping with his recent disability—noticed something peculiar: Orwell was positively obsessed with smell. In this original, irreverent biography, Sutherland offers a fresh account of Orwell’s life and works, one that sniffs out a unique, scented trail that wends from Burmese Days through Nineteen Eighty-Four and on to The Road to Wigan Pier.

Sutherland airs out the odors, fetors, stenches, and reeks trapped in the pages of Orwell’s books. From Winston Smith’s apartment in Nineteen Eighty-Four, which “smelt of boiled cabbage and old rag mats,” to the tantalizing aromas of concubine Ma Hla May’s hair in Burmese Days, with its “mingled scent of sandalwood, garlic, coconut oil, and jasmine,” Sutherland explores the scent narratives that abound in Orwell’s literary world. Along the way, he elucidates questions that have remained unanswered in previous biographies, addressing gaps that have kept the writer elusively from us. In doing so, Sutherland offers an entertaining but enriching look at one of the most important writers of the twentieth century and, moreover, an entirely new and sensuous way to approach literature: nose first.

“Orwell’s Nose is an olfactory cornucopia, a brilliant thematic biography and a compassionate exposure of an almost clean conscience in an invariably dirty age.”
— Wall Street Journal

“Orwell’s Nose is highly readable in a quick, casual style with many felicities. . . . This book sent me walking about nose aloft, like a Bisto Kid, hungry for (in Sutherland’s phrase) ‘life’s olfactions.’”
— Financial Times

“In this ‘pathological biography,’ a noted critic rereads Orwell and determines that the writer ‘was born with a singularly diagnostic sense of smell.’ In addition to the infamous assertion in ‘The Road to Wigan Pier’ that ‘the lower classes smell,’ Sutherland, who recently lost his own sense of smell, turns up other pungent landmarks of Orwell’s life.”
— New Yorker

“Irreverent, conjectural, even scurrilous, Sutherland’s narrative delights in the funky underside of this most revered of literary figures, even as it clearly exhibits a continued affection for him.”

“As a literary critic, rather than a traditional biographer, Sutherland takes the surprisingly atypical approach of viewing the work as central to the life. The result is a relatively short book that captures the essence of Orwell better than the average six hundred page biography. . . . In the universe of smells that Sutherland presents, the smells of teak, of English pastures, of industrial poverty, and of dying humanity, it was the smell of a working typewriter, of ink running off a ribbon, that most regularly greeted Orwell’s nasal passages. In Orwell’s work, as in his nose, we find the odor of mortality and the mystery of creation paired in a vibrant paradox.”
— Los Angeles Review of Books

“As the title suggests, this entertaining and scholarly, if somewhat eccentric, biography examines the life and works of George Orwell through the lens of his olfactory preoccupations. . . . What emerges is a rigorous, rollicking, and at times ribald portrait of the author, from his childhood ‘born into a class neurotic about sanitation’ to the ‘lower-class smell’ of his barracks as a British colonial policeman in Burma and his eventual marriage and purchase of ‘a grand building, still smelling of oats and horse piss.’. . .  The overall depiction is diligently researched and scrupulously evenhanded, with the two authors’ (perhaps) shared fixation providing a unique scaffolding for a fresh look at a luminary of English letters.”

“An unusual perspective illuminates a much written-about author.”

“This clever little book packs in a great deal: a prefatory essay on smell in literature, a breakneck biography of George Orwell and three quirky appendices including ‘smell narratives’ of two of his books. Sutherland has an impressive nose for the pongs in Orwell’s prose. . . . This biography is redolent, above all, of Sutherland’s enduring enthusiasm for a writer he has been reading for more than half a century.”

“Orwell’s Nose is well-suited to London-based Reaktion Books’ peerless list of offbeat but intellectually compelling titles. Compelling this ‘pathological’ biography is. For an Orwell lover, just contemplating Sutherland teasing out what he calls the writer’s ‘smell narratives’ is to be pitched into the opening of 1984 and into a new appreciation of its literary, as opposed to political, power.”
— Brian Bethune

“A good biography, [Orwell] asserted, needed two things: piety and wit. John Sutherland’s extraordinary new book, Orwell’s Nose, abounds in both . . . As with Orwell’s writing style, very little goes to waste here, and the book is a remarkable achievement of synthesis. His demeanour and habits are subjected to an examination that, despite its brevity, is in some ways as forensic as those offered by the lengthier investigations of Sutherland’s predecessors. . . . As one would expect from a writer of Sutherland’s stripe, there’s an easy familiarity with Orwell’s output, the reams of criticism in print, and also the countless literary allusions found in his writings, all of which make it an effortless read.”
— PopMatters

“Odour is front and centre in Orwell’s work, and Sutherland has provided some helpful ‘smell narratives’ that enable us to follow an oblique path through some of the best-known texts (fiction and documentary) from one hotspot of rankling secretions to another.”

"Sutherland is able, with the straightest of faces, to talk about Coming Up For Air being 'the most aromatic of Orwell’s novels'--a book that, his researches insist, 'fairly caresses the nostrils.' A conventional academic critic--which Sutherland is not--would probably throw up his or her hands in horror at this insouciance, but it takes only the briefest saunter through the Eng Lit canon to establish that the University of London's former Lord Northcliffe Professor is on to something, not merely in the matter of Orwell's nose but with literary life in general."
— D. J. Taylor

"Orwell has been the subject of acres of print, but I've never come across an approach as original as Sutherland’s. . . . Insightful and quite brilliant."
— Mail on Sunday

John Sutherland is the author of many books, including Lives of the Novelists and How to Be Well Read. He is the Lord Northcliffe Professor of English emeritus at University College London.