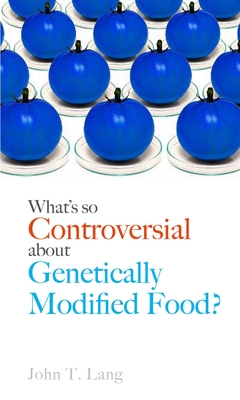 The rampant use of genetically modified food incites fierce and seemingly intractable debates among environmental activists, scientists, government regulators, and representatives of the food and agriculture industries. While some portray GMOs as scientific progress, others frame them as a form of perverted science. But why, exactly, are they so controversial? This timely and balanced book explores the science—and myth—that surrounds genetically modified food in order to help us understand just what’s at stake.

John T. Lang begins by grounding the debates in the biology and chemistry behind genetic modification. He then shows how food is deeply imbued with religious, social, cultural, and ethical meanings, which bring a variety of non-scientific issues to the forefront and make genetically modified food a proxy for larger debates regarding topics such as globalization and corporate greed. Centrally, he contends that the controversies surrounding the technology reflect ongoing tensions between social and political power, democratic practice, and corporate responsibility. As Lang illustrates, while modern, mechanized, and genetically enhanced production has given the consumer an unprecedented variety and quantity of food, it has also introduced new social and environmental vulnerabilities and uncertainties into the global food system.

Bringing together science, politics, economics, and culture, this book offers a deeply informed look at an important aspect of modern agriculture. It will prove invaluable to anyone who shops at the grocery store, whether they like the benefits that genetic modification has to offer or fear that nature is something we should have left alone.