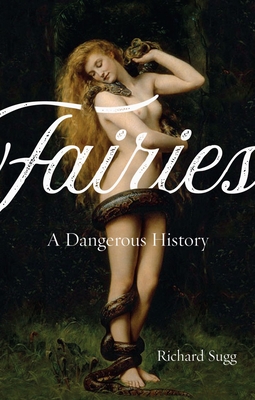 Don’t be fooled by Tinkerbell and her pixie dust—the real fairies were dangerous. In the late seventeenth century, they could still scare people to death. Little wonder, as they were thought to be descended from the Fallen Angels and to have the power to destroy the world itself. Despite their modern image as gauzy playmates, fairies caused ordinary people to flee their homes out of fear, to revere fairy trees and paths, and to abuse or even kill infants or adults held to be fairy changelings. Such beliefs, along with some remarkably detailed sightings, lingered on in places well into the twentieth century. Often associated with witchcraft and black magic, fairies were also closely involved with reports of ghosts and poltergeists.

In literature and art, the fairies still retained this edge of danger. From the wild magic of A Midsummer Night’s Dream, through the dark glamour of Keats, Christina Rosetti’s improbably erotic poem “Goblin Market,” or the paintings inspired by opium dreams, the amoral otherness of the fairies ran side-by-side with the newly delicate or feminized creations of the Victorian world. In the past thirty years, the enduring link between fairies and nature has been robustly exploited by eco-warriors and conservationists, from Ireland to Iceland. As changeable as changelings themselves, fairies have transformed over time like no other supernatural beings. And in this book, Richard Sugg tells the story of how the fairies went from terror to Tink.


Praise For Fairies: A Dangerous History…

"Sugg’s book is in itself a kind of bewitchment, shimmering and eloquent, written with a certain ironic awareness and in the spirit of surrender to unknowing. As he notes: 'Magic was before science and will be after it. Fairies live longer than pedagogues.'"
— Australian

"[Delves] at length, and with admirable knowledge and insight, into contemporary media spins on [its] respective totems. . . . Thoroughly researched and richly illustrated chronicles of the folkloric and literary pedigrees of [its] subject creatures."
— Bob Duffy

"Sugg . . . wants to disabuse you of any nonsense you may harbor about fairies being small, whimsical, and affectionate. The fact is, for much of recorded history they were regarded as dangerous and malicious. Traditional fairy belief has it that they were the original fallen angels, who accompanied the Proud Angel to a realm between Heaven, Hell, and Earth. Sugg writes well, and amusingly, about the evolution of fairies from Terror to Tinkerbell."
— Sarah Murdoch

"[A] bulging field guide to fairy lore. Taking readers on a tour of the brownies, hobs, changelings, kelpies, selkies, sea trows, and various other fairy types of the British Isles and beyond, Sugg investigates 'the great heresy of fairyland' in folklore, the arts, and historical testimony. This panoramic guide to the sights, sounds, and even smells of fairies . . . begins sensibly enough with the question of fairy geography, charting real-world locations of fairy sightings . . . The book continues with an absorbing range of reports from those claiming to have seen fairies . . . as well as the more scholarly accounts of figures such as Arthur Conan Doyle and the composer Thomas Wood."
— Elizabeth Dearnley

"Far from the innocuous flutterings of Disney films, in the sixteenth and seventeenth centuries fairies were often regarded as dangerous creatures. Abduction, murder, being forced to dance to death: these were only a few of the fates they could hand out, and people lived in real fear of their otherworldly strangeness. This account of apparent 'sightings,' and what they tell us about wider society, makes for compelling reading."
— History Revealed

"Faeries. Fairies. The fae. However you spell it, nothing brings the warmer months to life like the mythical lore of fairies. . . . Brilliantly researched and compellingly written, this book delves deeply into the darker side of fairy folklore. From fairy poltergeists to fallen angels, Sugg takes us on a journey through a haunted garden of mythical delights."
— Moody Moons

"A refreshing look at the fascinating, dark, and dangerous folkloric fairy, . . . the book is a charming read for interested general readers and a timely scholarly update on the fairy problem. . . . It is a very useful addition to the modern fairy enthusiast’s Cabinet des Fées."
— Gramarye

"A richly detailed look at fairies in art and literature, emphasizing the Elizabethan period through our own. . . . Sugg is always careful to differentiate firsthand narratives from widely accepted legends and to note the source and date and circumstances of a given account, but he emphasizes sources that treat their subjects with personal interest rather than as a tool of academic analysis. He is interested in everything the fairies might mean, but especially in what they are: powerful, inscrutable beings at home in a world of their own and capable of significant incursions into ours."
— Weekly Standard

"Reflects upon the nature of fairies, their representation within oral tradition and popular culture, and humans' relationship to the fantastic. . . . A thought-provoking monograph that encourages readers to challenge their understanding of fairies and of people's relationship with nature, education, and the fantastic. . . . As a creative writer, I found the stories presented in this volume inspiring."
— Children's Literature Association Quarterly

“An instant classic: one of our best books on the supernatural past and present.”
— Simon Young, coauthor of "Magical Folk: British and Irish Fairies 500 AD to the Present"

“Sugg provides both a richly entertaining introduction to the history of fairyland and a thoughtful exploration of the nature of belief. This book may not make you believe in fairies, but it will make you appreciate why such beliefs should be taken seriously.”
— Darren Oldridge, University of Worcester

Richard Sugg is the author of eight books, including Mummies, Cannibals and Vampires; A Century of Ghost Stories; and A Singing Mouse at Buckingham Palace.
Loading...
or support indie stores by buying on