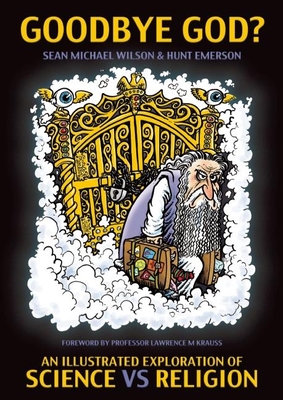 An Illustrated Exploration of Science vs. Religion

A graphic novel that explores evolution vs. creation and calls for an end to the teaching of creationism in schools. It pans out to consider the negative impacts of religion, and with the active support of the American Humanist Association, demonstrates how a concern for humanism, science, and reasoned logical thinking is crucial for the development of society.

Sean Michael Wilson is author of a number of books, including Iraq: Operation Corporate Takeover and Fight the Power.

Hunt Emerson's many comics and graphic novels include the adaptations Dante's Inferno and Lady Chatterley's Lover. He has worked with Alan Moore and has won many awards.

Sean Michael Wilson: Sean Michael Wilson is a comic book writer from Scotland, who now lives in Japan. He has had more than a dozen books published with a variety of US, UK and Japanese publishers. His book with War on Want, "Iraq: Operation Corporate Takeover" was widely reported on by a variety of mainstream agencies. He is also the editor of the critically acclaimed collection "AX: alternative manga" (one of Publishers Weekly s "Best ten books of 2010"). He is co-author of the recent visual history of protest "Fight the Power."

Hunt Emerson: Hunt Emerson is a cartoonist living and working in Birmingham, England. He was closely involved with the "Birmingham Arts Lab" of the mid-to-late 1970s, and with the British underground comics scene of the 1970s and 1980s. The Emerson graphic novels "Lady Chatterley's Lover," "The Rime of the Ancient Mariner," "Casanova's Last Stand"and other adaptations of classic novels and tales have been successfully sold in numerous countries, and translated into several different languages. He is co-artist of the recent visual history of protest "Fight the Power.""
Loading...
or support indie stores by buying on