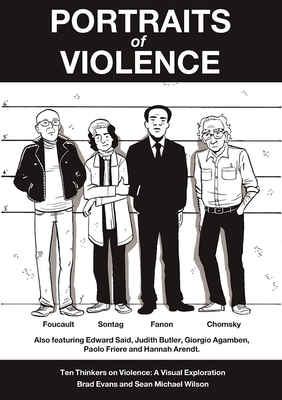 An Illustrated History of Radical Thinking

Bringing together established academics and award-winning comic book writers and illustrators, Portraits of Violence illustrates the most compelling ideas and episodes in the critique of violence.

Dr. Brad Evans is a political philosopher, critical theorist and author from the University of Bristol, United Kingdom.

Sean Michael Wilson is an acclaimed comic book writer with more than a dozen books published with a variety of US, UK, and Japanese publishers.

Brad Evans: Dr. Brad Evans is a political philosopher, critical theorist and writer, whose work specialises on the problem of violence. The author of some ten books and edited volumes, along with over forty academic and media articles, he currently serves as a senior lecturer at the School of Sociology, Politics & International Studies, the University of Bristol, UK. His co-directed movie Ten Years of Terror received international acclaim, screening in the Solomon K. Guggenheim museum, New York during September 2011. Brad has recently been a visiting fellow at the Committee on Global Thought at Columbia University, New York (2013-14). He regularly writes for prominent news sources such as The New York Times, LA Review of Books, The Guardian, Independent, World Financial Review, Al Jazeera, TruthOut, Counter-Punch and Social Europe. Sean Michael Wilson: Sean Michael Wilson is a comic book writer from Scotland, who now lives in Japan. He has had more than a dozen books published with a variety of US, UK and Japanese publishers. His book with War on Want, Iraq: Operation Corporate Takeover was widely reported on by a variety of mainstream agencies. He is also the editor of the critically acclaimed collection AX: alternative manga (one of Publishers Weekly's Best ten books of 2010). He contributed to an anthology of stories about WW1 To End All Wars (Soaring Penguin Press) has been nominated for both 'Best Anthology' and 'Best Reality-Based Work' for the 2015 Eisner awards. He was the lead writer for Fight the Power (Seven Stories/New Internationalist) and Goodbye God? (New Internationalist). Carl Thompson: Carl Thompson is a cartoonist based in Minneapolis, MN, and graduated from the Minneapolis College of Art and Design in December of 2011. He has worked with writer Sean Michael Wilson on the political comic strip Green Benches, which was published monthly in the British magazine Blue and Green Tomomorrow, and the ground breaking strip A history of Mr X, published in a collection by the University of Dundee. Robert Brown: Robert Brown is a cartoonist based in Manchester, UK. He has contributed strip cartoons to anthologies such as Solipsistic Pop, Paper Tiger Comix and Sea Mouse. He began publishing his current comic book series Killjoy in 2011. Mike Medaglia: Mike Medaglia is a comics artist, illustrator and Zen Buddhist. His book One Year Wiser was published by SelfMadeHero. It is a collection of 365 daily meditations adapted into full page illustrations. He draws comics regularly for The Huffington Post about Zen and modern life. And at Jessica Kingsley Publishers he is art editor working on a range of comics and graphic novels about topics like chronic pain, dementia, Aspergers Syndrome, PTSD and anxiety.
Loading...
or
Not Currently Available for Direct Purchase