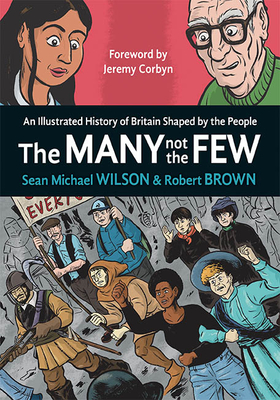 The Many Not the Few

An Illustrated History of Britain Shaped by the People

An old union rep, Joe, and his granddaughter, Arushi, spend a few pleasant days together going over the history of the labour movement. Over tea and sandwiches in his studio they consider the whole wide sweep and points of connection throughout history.

Starting way back with the 14th-century Peasants' Revolt, taking in the Levellers and the Luddites, the expansion of the unions in the 19th century, the height of their power in the 70s, and the great conflicts and decline of the 80s.

With a mix of serious research and family jokes Joe and Arushi go into the complicated history, the ideological battles, the class conflict, a consideration of what unions are for, and what the future of unions may be.

Sean Michael Wilson is an award-winning graphic novel writer known for his books tackling social issues and history. Robert Brown is a regular contributor to anthology titles. He has his own comic series, Killjoy. This is their third collaboration.
Loading...
or support indie stores by buying on