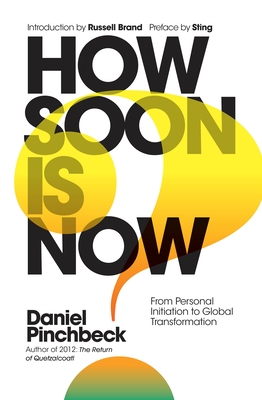 How Soon is Now

From Personal Initiation to Global Transformation

We are on the brink of an ecological mega-crisis threatening the future of life on earth and our actions over the next few years may well determine the destiny of our descendants. Between a manifesto and a tactical plan of action, How Soon is Now? by radical futurist and philosopher Daniel Pinchbeck outlines a vision for a mass social movement that will address this crisis.

Drawing on a huge range of resources and references Daniel Pinchbeck presents a compelling argument for the need for change on a global basis – it is only when we see ourselves as one planetary tribe that this change can occur. The central thesis is that humanity has self-willed the ecological crisis in order to bring about the necessary conditions for transcendence of our current state of being, by undergoing an initiatory ordeal on a planetary scale.

This collective ordeal is necessary for us to evolve from one state of being – our current level of consciousness – to the next. By passing through this initiation we realize ourselves as one unified being, a planetary super-organism in a symbiotic relationship with the Earth's ecology and the entire web of life. Covering everything from energy and agriculture, to culture, politics, media and ideology, Pinchbeck's book is ultimately about the nature of the human soul and the future of our current world. He calls for an intentional and consciously designed metamorphosis of our current systems, which transform capitalist and exclusive structures into participatory, democratic, and inclusive ones, based on an integration of Eastern metaphysics, social ecology, and radical political thought. "How Soon is Now? gives us the context we need to understand the chaos and turbulence of our times." – Sting

Praise For How Soon is Now: From Personal Initiation to Global Transformation…

'It speaks to something I often say our culture sorely lacks: Rites of passage.' - Neil Strauss

‘How Soon is Now? gives us the context we need to understand the chaos and turbulence of our times.’ – Sting

'A blueprint for the future' - Russell Brand

'Daniel Pinchbeck's HOW SOON IS NOW? is a powerful exploration of our need for a massive upgrade of collective consciousness if we are to address the inconsistencies and pathologies that afflict the modern world. While we have seen massive progress, we have also seen moral failures... and our unwillingness to question preexisting dogma might cost us dearly.  Daniel's book offers a startling call to action!' - Jason Silva, artist, filmmaker and futurist

‘Here we are, humanity, caught in the moment between devolution and conscious evolution by choice, not chance. Daniel Pinchbeck's new book takes us to this exact inflection point and reveals in remarkable clarity and brilliance, We Do Know What To Do, in almost every field from spiritual to social to environmental innovations arising everywhere.’  – Barbara Marx Hubbard, author, Conscious Evolution

‘Daniel Pinchbeck has emerged as a rational and clear voice of hope for a new post-capitalist future, offering alternatives to hack democracy for a better society.’ – Jefferson Hack, CEO and Founder, Dazed & Confused

‘I recommend this book to anyone who is trying to make sense of climate change within a bigger picture that includes the evolution of civilization and consciousness.’ – Charles Eisenstein, author, Sacred Economics

‘How Soon Is Now offers a spiritually driven approach to global economic and ecological crisis… With dangerous and admirable honesty, Pinchbeck tests his deepest held assumptions and judges his life choices in a crucible of self-doubt. It's at once an initiation for himself, and an invitation for us to ask these same sorts of questions of ourselves as individuals and a society.’ – Doug Rushkoff, author, Throwing Rocks at the Google Bus

'Provides deep insight into the essential issues of our time ... could spark the revolution of consciousness that is the revolution not just of thinking, but of acting.’ - Ervin Laszlo, Bestselling Author and Philosopher

'Daniel Pinchbeck’s life is the hero’s journey. Like Homer’s Odyssey, How Soon Is Now is a song of redemption for a world torn apart by the monsters of our own creation. We’ve dreamed a world that is consuming itself into extinction. Pinchbeck offers us a new dream and in doing so takes us on a powerful, magical voyage into balance and sanity.' - John Perkins, New York Times Bestselling Author of Confessions of an Economic Hitman

'With his new work Daniel Pinchbeck is proposing systemic solutions to the ecological crisis looming over us, requiring a drastic shift in lifestyle and new levels of global cooperation. Whether or not you agree with all of his conclusions, How Soon Is Now? will challenge most conventionally held assumptions about the global environment.' - Moby

Daniel Pinchbeck is the author of Breaking Open the Head (Broadway Books, 2002),2012: The Return of Quetzalcoatl (Tarcher/Penguin, 2006), and Notes from the Edge Times(Tarcher/Penguin, 2010). He is the founder of the think tank, Center for Planetary Culture which produced the Regenerative Society Wiki and his essays and articles have been featured in The New York Times Magazine, Esquire, Rolling Stone, ArtForum, The New York Times Book Review, The Village Voice, Dazed and Confused and many other publications. In 2007, Daniel launched the web magazine Reality Sandwich and co-founded Evolver.net. Evolver currently includes Evolver Learning Labs, a webinar platform, and The Alchemist's Kitchen, for online retail. Daniel also edited the publishing imprint, Evolver Editions with North Atlantic Books. He is featured in the 2010 documentary, 2012: Time for Change directed by Joao Amorim and produced by Mangusta Films. He hosted the talk show, Mindshift.net, for GaiamTV.