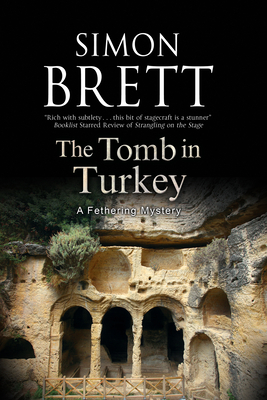 The Tomb in Turkey (Fethering Mystery #16)

Carole and Jude's Turkish holiday takes a murderous turn in the new Fethering mystery
Carole Seddon has never enjoyed holidays much. Nevertheless, she has allowed herself to be persuaded by her friend Jude to accept a fortnight's free accommodation at a luxurious Turkish villa owned by Jude's property developer friend Barney Willingdon. But from the outset the holiday is marred by a series of menacing incidents: threatening messages daubed on the villa walls; and their host being accosted by a knife-wielding man at a local restaurant. As Carole and Jude launch into what they do best - investigating - it becomes clear that Barney Willingdon has made plenty of enemies, with his ruthless business deals and complicated love life. Matters come to a head when Carole's sightseeing trip to nearby Pinara is curtailed by the discovery of a body in one of the ancient Lycian tombs. And what really did happen to Barney's first wife, Zoe?

Simon Brett worked as a producer in radio and television before taking up writing full-time. He is the author of the much-loved Fethering mysteries, Charles Paris series and the Mrs Pargeter novels. In 2014 he was awarded the Crime Writers' Association's prestigious Diamond Dagger for sustained excellence and contribution to crime writing. He lives in an Agatha Christie-style village in the South Downs.
Loading...
or support indie stores by buying on