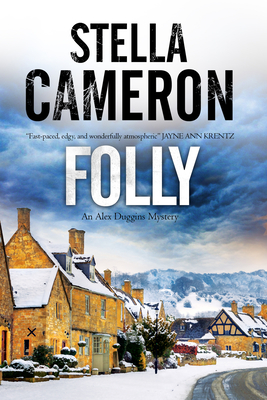 This traditional brand-new British mystery series is an intriguing departure for bestselling romantic suspense author Stella Cameron. It introduces rural inn owner and amateur sleuth Alex Duggins. Following the breakdown of her marriage, Alex Duggins has returned to her picturesque hometown of Folly-on-Weir in the Cotswolds in order to start afresh. But you can't outrun the past, as Alex is about to discover when she stumbles across a frosted corpse buried in the snow. The subsequent murder investigation threatens to unearth old secrets - including Alex's own. As Folly-on-Weir braces for a chilling winter and Alex finds herself top of the police's suspect list, she determines to clear her name and find the real murderer. But as she begins to peel back the layers of deception that have long-concealed one of the town's darkest secrets, she herself becomes the target of a ruthless killer who has nothing left to lose. Will Alex be the next snow-covered body to be found in the beautiful hills above the town?

Stella Cameron is a New York Times and USA Today bestselling author. With over fourteen million copies of her books in print, Cameron has turned her pen to mysteries. She draws on her English background for a new, already critically acclaimed mystery series, introducing Alex Duggins and her pub, The Black Dog, the little town of Folly-on-Weir and the intrigue that bubbles beneath the surface of village life. Atmospheric, deeply character and relationship-driven, the first book in the series, FOLLY, reveals the power of old secrets to twist the present. Cameron's reputation for using her backgrounds to add tension and allure to her stories is heightened again. Cameron is the recipient of the Pacific Northwest Achievement Award for distinguished professional achievement and for enhancing the stature of the Northwest Literary community. She lives in Washington with her husband Jerry, her Papillon Millie, black cat Zipper, and a cheeky little tabby named Jack.
Loading...
or support indie stores by buying on