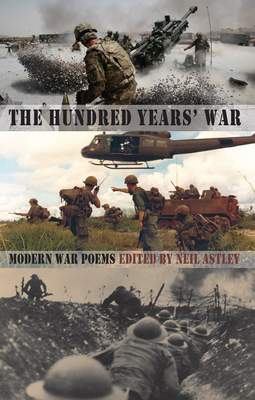 Modern War Poems from the Somme to Afghanistan

War never stops. There have been two world wars since 1914 lasting for ten years, but wars have continued for a hundred years since then in many parts of the world: wars between nations, tribes and factions, wars over religion and beliefs, wars fought for land or oil or history, civil wars, political wars, and the Cold War when the West remained on a war-footing while supposedly at peace. This anthology presents poems from a hundred years of war by poets writing as combatants on opposite sides, as victims or anguished witnesses. It chronicles times of war and conflict from the trenches of the Somme through the Spanish Civil War to the horrors of the Second World War and the Holocaust; and in Korea, the Middle East, Vietnam, Central America, Ireland, the Balkans, Iraq and Afghanistan and other so-called theatres of war. There are poems from years when the world was threatened by all-out nuclear war and more recent poems written in response to international terrorism. Editor Neil Astley has selected many of the poems from his Staying Alive trilogy - the anthologies Staying Alive, Being Alive and Being Human - but has added many others from elsewhere to create this deeply moving testament to humanity caught up in a hundred years of war. Like the trilogy, this is a world poetry anthology featuring poets from a variety of nations writing from different perspectives, experiences and cultures. Where possible, the poems from each war or conflict are presented chronologically in terms of when they were written or set, building up a picture of what individual poets from different nations were experiencing at the same time, either on the same battlegrounds or in other parts of the world (including the home front), with, for example, British, French and German poets all writing of shared experiences in opposite trenches during the five-month Battle of the Somme. At different stages of each war there are also poets responding events in their own countries. For example, in just one three-month period, from August to November 1944, Polish poets join the Warsaw Uprising, Miklos Radnoti is herded on a forced march from Serbia to Hungary (where he is killed), other Hungarian poets witness deportations to camps, Dylan Thomas voices the anguish of Londoners under V-bomb attack, and Louis Simpson is a foot soldier caught up in the chaotic Battle of the Bulge. Just as the original Hundred Years' War in the 14th and 15th centuries was actually a series of nationalistic conflicts rooted in disputes over territory, so it has been in the wars fought over the past century, but with even worse suffering inflicted on countries and people subjected to warfare and mass killing on a scale unimaginable in any earlier time. And yet amidst all that horror, there are individual voices bearing witness to our shared humanity, somehow surviving the folly with defiance and hope, yet often aware that the lessons of history are rarely passed on from one generation to the next. As Germany's Gunter Kunert writes in his poem 'On Certain Survivors' in which a man is dragged out from the debris of his shelled house: 'He shook himself And said Never again. At least, not right away.'

Neil Astley is editor of Bloodaxe Books, which he founded in 1978. His books include novels, poetry collections and anthologies, most notably those in Bloodaxe's Staying Alive anthology series: Staying Alive (2002), Being Alive (2004), Being Human (2011), and Staying Human (2020), a Poetry Book Society Special Commendation; and three collaborations with Pamela Robertson-Pearce, Soul Food: nourishing poems for starved minds (2008), and the DVD-books In Person: 30 Poets (2008) and In Person: World Poets (2017). He has published two novels, The End of My Tether (2002), which was shortlisted for the Whitbread First Novel Award, and The Sheep Who Changed the World (2005). He received an Eric Gregory Award for his poetry, was given a D.Litt from Newcastle University for his work with Bloodaxe Books, and in 2018 was made an Honorary Fellow of the Royal Society of Literature. He also guest-edited a transatlantic all-poetry issue of the American literary journal Ploughshares, the first such issue in its 43-year history. He lives in the Tarset Valley of Northumberland, England.
Loading...
or support indie stores by buying on