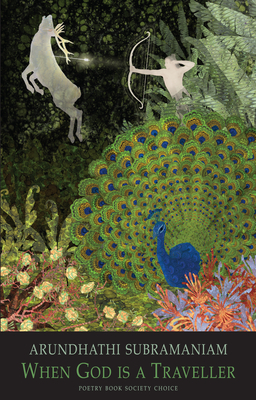 When God Is a Traveller

Here are poems that celebrate an expanding kinship: of passion and friendship, mythic quest and modern-day longing, in a world animated by dialogue and dissent, delirium and silence. Circling themes of intimacy and time, they return to the urgency of conversation: that fragile bridge across the frozen attitudes that divide our world. But at the heart of the collection is a deeper preoccupation, with those blurry places where humans might walk with gods, where the body might touch the beyond, where the enchanted might intersect effortlessly with the everyday. Where one stumbles upon what the poet simply calls 'love without a story'. Arundhathi Subramaniam's previous book from Bloodaxe, When God Is a Traveller, was shortlisted for the T.S. Eliot Prize. Love Without a Story is her fourth collection of poetry. Her earlier work is available in Where I Live: New & Selected Poems.

Arundhathi Subramaniam is an award-winning poet and writer on spirituality and culture. Winner of the inaugural Khushwant Singh Memorial Prize for Poetry in 2015, the Raza Award for Poetry and the International Piero Bigongiari Prize, she divides her time between Bombay and New York. She has published two previous books of poetry in Britain with Bloodaxe, Where I Live: New & Selected Poems (2009), which combines selections from her first two Indian collections, On Cleaning Bookshelves and Where I Live, with new work, and When God Is a Traveller (2014), a Poetry Book Society Choice which was shortlisted for the T.S. Eliot Prize, won the inaugural Khushwant Singh Prize at the Jaipur Literary Festival, and was awarded the International Piero Bigongiari Prize in Italy. Her latest collection, Love Without a Story, is published by Bloodaxe in 2020. She has also written The Book of Buddha (Penguin, 2005) and Sadhguru: More Than a Life (Penguin, 2010), co-edited Confronting Love (Penguin, 2005), an anthology of Indian love poems in English, and edited Pilgrim's India: An Anthology (Penguin, 2011) and Eating God: A Book of Bhakti Poetry (2014). In 2006 she appeared at London's Poetry International festival and gave readings throughout Britain on a tour organised by the Poetry Society. She also took part in the T.S. Eliot Prize reading at London's Southbank Centre in January 2015.
Loading...
or support indie stores by buying on