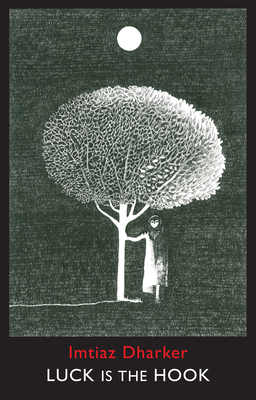 Luck Is the Hook

Imtiaz Dharker was born in Pakistan, grew up a Muslim Calvinist in a Lahori household in Glasgow, was adopted by India and married into Wales. Her main themes are drawn from a life of transitions: childhood, exile, journeying, home, displacement, religious strife and terror, and latterly, grief. She is also an accomplished artist, and all her collections are illustrated with her drawings, which form an integral part of her books. Luck Is the Hook is her sixth book from Bloodaxe. In these poems, chance plays a part in finding or losing people and places that are loved: a change in the weather, a trick of language, a bomb that misses its mark, six pomegranate seeds eaten by mistake; all these events cast long shadows and raise questions about who is recording them, about believing, not believing, wanting to believe. A knot undone at Loch Lomond snags over Glasgow, a seal swims in the Clyde, a ghost stalks her quarry at a stepped well, an elephant and a cathedral come face to face on the frozen Thames, a return ticket is thrown into the tide of Humber, strangers wash in. Even in an uncertain world, love tangles with luck, flights show up on the radar and technology keeps track of desire. Imtiaz Dharker was awarded the Queen's Gold Medal for Poetry 2014 for Over the Moon and for her services to poetry.

Imtiaz Dharker grew up a Muslim Calvinist in a Lahori household in Glasgow, was adopted by India and married into Wales. She is an accomplished artist and documentary film-maker, and has published six books with Bloodaxe, Postcards from god (including Purdah) (1997), I Speak for the Devil (2001), The terrorist at my table (2006), Leaving Fingerprints (2009), Over the Moon (2014) and Luck Is the Hook (2018). All her poetry collections are illustrated with her drawings, which form an integral part of the books; she is one of very few poet-artists to work in this way. She was awarded the Queen's Gold Medal for Poetry for 2014, presented to her by The Queen in spring 2015, and has also received a Cholmondeley Award from the Society of Authors and is a Fellow of the Royal Society of Literature. Over the Moon was shortlisted for the Ted Hughes Award for New Work in Poetry 2014. Her poems are on the British GCSE and A Level English syllabus, and she reads with other poets at Poetry Live! events all over the country to more than 25,000 students a year. She has had a dozen solo exhibitions of drawings in India, London, Leeds, New York and Hong Kong. She scripts and directs films, many of them for non-government organisations in India, working in the area of shelter, education and health for women and children. In 2015 she appeared on the iconic BBC Radio 4 programme Desert Island Discs.
Loading...
or support indie stores by buying on