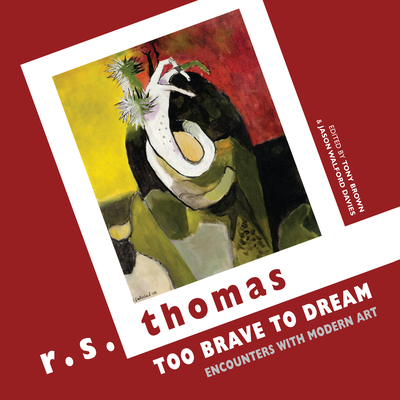 Too Brave to Dream

When R.S. Thomas died in 2000, two seminal studies of modern art were found on his bookshelves - Herbert Read's Art Now (1933) and Surrealism (1936), edited by Read and containing essays by key figures in the Surrealist movement. Some three dozen previously unknown poems handwritten by Thomas were then discovered between the pages of the two books, poems written in response to a selection of the many reproductions of modern art in the Read volumes, including works by Henry Moore, Edvard Munch, George Grosz, Salvador Dali, Rene Magritte and Graham Sutherland - many of whom were Thomas's near contemporaries. These poems are published here for the first time - alongside the works of modern art that inspired them. Thomas's readings of these often unsettling images demonstrate a willingness to confront, unencumbered by illusions, a world in which old certainties have been undermined. Personal identity has become a source of anguish, and relations between the sexes a source of disquiet and suspicion.Thomas's vivid engagements with the works of art produce a series of dramatic encounters haunted by the recurring presence of conflict and by the struggle of the artist who, in a frequently menacing world, is 'too brave to dream'. At times we are offered an unflinching vision of 'a landscape God / looked at once and from which / later he withdrew his gaze'.

R.S. Thomas (1913-2000) is a major writer of our time, one of the finest religious poets in the English language and one of Wales's greatest poets. He published over 50 books of poetry and prose. Most of his poems from his first 50 years of writing are in Collected Poems 1945-1990 (Phoenix Press), while the poems from his last five collections are included in Collected Later Poems (2004) from Bloodaxe. His Uncollected Poems, edited by Tony Brown and Jason Walford Davies (Bloodaxe Books, 2013), selects previously published but uncollected poems included in none of his other published books.
Loading...
or support indie stores by buying on