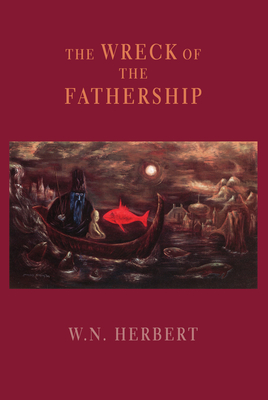 The Wreck of the Fathership

Being appointed Dundee Makar (or City Laureate) implied that Bill Herbert might settle into middle age. He rented a ﬂat overlooking Broughty Ferry harbour to write about his home town in both its native tongues. Then within six months his much-loved father died, and that civic idyll was thrown into crisis. Personal and political roles collided as referenda for Scottish independence and EU membership, then the US elections, signalled that the post-war liberal value system was very much in crisis. This is his Dundonian Book of the Dead, in which he explores both his own grief and the encroachment of a new intolerance. His town's deﬁning modern disaster - the loss in 1959 of the lifeboat Mona with all hands - becomes a symbol for a world turned upside down. But while patriarchy ﬂounders in a storm of its own undoing, his absurd alter ego, William McGonagall, brings his unique tragedian's eye to bear on both the city's and our society's efforts to right itself. The comic and the tragic become catastrophe's ﬂotsam and jetsam, and the image of the overturned boat is reﬂected in the very structure of this book, with a keel-hauling of Dundee Doldrums for its climax - poems which resist any stasis of the imagination. The crew of this latter-day Ship of Fools include Captain Beefheart, the cannibal clan of the Denﬁends, and a lion, while the passenger list features the surrealist Leonora Carrington, various Jesuses, and the ghastly Imperator Trumpo. Its voyages to alternative futures and pasts echo those of Herbert's merchantman father, while, in a manner that matches Bill Senior's later trade of precision engineer, it ﬁts together a dynamic range of forms with an intense focus on the metamorphic and redemptive energies of language.

W.N. [Bill] Herbert is a highly versatile poet who writes both in English and Scots. Born in Dundee, he established his reputation with two English/Scots collections from Bloodaxe, Forked Tongue (1994) and Cabaret McGonagall (1996), followed by The Laurelude (1998), The Big Bumper Book of Troy (2002), Bad Shaman Blues (2006) and Omnesia (2013). His latest collection, The Wreck of the Fatherland, is publshed by Bloodaxe in 2020. He has also published a critical study, To Circumjack MacDiarmid (OUP, 1992) drawn from his PhD research. His practical guide Writing Poetry was published by Routledge in 2010. He co-edited Strong Words: modern poets on modern poetry (Bloodaxe Books, 2000) with Matthew Hollis, and Jade Ladder: Contemporary Chinese Poetry (Bloodaxe Books, 2012) with Yang Lian. Bill Herbert is Professor of Poetry and Creative Writing at Newcastle University and lives in a lighthouse overlooking the River Tyne at North Shields. He was appointed Dundee's first Makar in 2013. Twice shortlisted for the T.S. Eliot Prize, his collections have also been shortlisted for the Forward Prize, McVities Prize, Saltire Awards and Saltire Society Scottish Book of the Year Award. Four are Poetry Book Society Recommendations. In 2014 he was awarded a Cholmondeley Prize for his poetry, and an honorary doctorate from Dundee University. In 2015 he became a Fellow of the Royal Society of Literature.
Loading...
or support indie stores by buying on