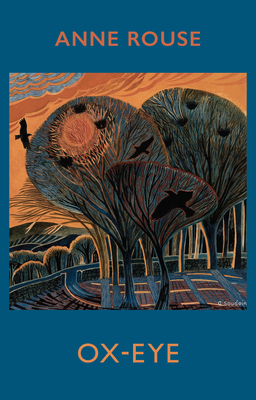 Anne Rouse is a keenly observant writer of spiky satirical portraits and shapely lyrics of the ordinary and the bizarre.

Her perspective in Ox-Eye - the term for a small cloud presaging a storm - is one of apprehension in poems relating to personal and social change. Ranging from her native east coast of America to her adopted home on the south coast of England, these incisive but often amused poems question how we view past and present, dismantling obsolete nostalgia, and casting a critical eye on what we wish for and what may happen instead.

Ox-Eye is her fifth collection from Bloodaxe, appearing 14 years after her previous book, The Upshot: New & Selected Poems, which included the new poems of The Divided (2008), along with selections from her first three critically acclaimed earlier collections, Sunset Grill (1993) and Timing (1997) - both Poetry Book Society Recommendations - and The School of Night (2004).

Anne Rouse was born in Washington, DC, and grew up in Virginia. After some years working in London as a psychiatric nurse, she now lives in East Sussex. A former health worker, she has been a Hawthornden Fellow, and a Royal Literary Fund Fellow at the University of Glasgow (2000-02), Queen's University, Belfast (2004-05), and the Courtauld Institute, London (2008). In the past, her poetry has received Poetry Book Society Recommendations and has been named in the Times Literary Supplement Book of the Year lists.
Loading...
or support indie stores by buying on