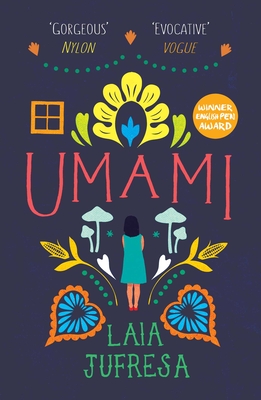 In five extraordinary apartments live five extraordinary families. Designed in the shape of a tongue, each apartment takes the name of a flavour – sweet, salty, sour, bitter and umami. And the tenants are no less eccentric. In Umami lives retired food anthropologist Alf, landlord and creator of the building. At Bitter lives manic depressive Marina, who neither eats nor paints but invents colours with words; at Sour lives newly parented (as well as New Age) couple Daniel and Daniela; and at Salty lives the Perez-Walkers with their daughter Ana, aka Agatha Christie, a precocious twelve-year-old who spends her days buried in detective novels to forget the unresolved death of her younger sister.

Alf is also grappling with the death of a loved one. Recently bereaved, he types letters to his dead wife in the hope she will somehow respond, and together Alf and Ana lean on and support one another – until their lives threaten to spiral out of control. Darkly comic and dizzyingly inventive, Umami is a remarkable and heart-wrenching novel that is as compelling as it is whimsically devastating.

Laia Jufresa’s work has appeared in McSweeney’s, Pen Atlas and Words Without Borders. In 2015 she was invited by the British Council to be the first ever International Writer in Residence at Hay Festival in Wales, and in the same year she was named as one of the most outstanding young writers in Mexico as part of the project México20. Umami is her first novel. She lives in Cologne, Germany.

Sophie Hughes is a literary translator and editor living in Mexico City. Her translations have appeared in Asymptote, PEN Atlas, and the White Review and her reviews in the Times Literary Supplement and Literary Review.

'Ms Jufresa: Where the f*#! did you learn to tell a story so well?'
— Álvaro Enrigue, author of Sudden Death

'A lovely novel about family, friendship and community that is told through multiple points of view from people living in a small development in Mexico City. The range in characters from the recently widowed landlord, to the twenty year old “spinster” struggling to eat, to the girl building a milpa whose sister recently passed, all beautifully ties together through community, allowing for the exploration of many kinds of grief.’
— BookRiot

‘Umami is a debut novel that I am afraid has been criminally under-read, a slim book about community and loss that somehow doesn't feel as heavy as it could. Told from multiple perspectives within a building complex in Mexico City, it feels as if the early chapters are short stories with little in common, but Laia Jufresa magically layers them on top of each other, illuminating the secret sorrows that connect them all. It's beautifully translated by Sophie Hughes, a tall order because of the different kinds of language all of the characters use. In the end, Umami isn’t resolved in the ways a traditional novel would be – but it's satisfying and moving.’
— Barrie Hardymon, NPR

‘Umami is narrated by a child – a very, very funny child – as she grapples with the death of her sister. The novel expands to the lives of her neighbors in Mexico City, and something very special happens as their stories begin to intersect and merge. File this under the "makes-you-a-better-person" heading.’

‘Umami offers the enticing prospect of a vast and filthy megalopolis being opened up’.
— Independent

'Umami is true to its whimsical premise, the narrative a little sweet, a little salty, by turns bitter and sour. Very umami, and very funny at times despite the tragedies that mark each household. The setup could admittedly become tired over 250-plus pages, but Jufresa also works an innovative structure that leaves the reader questioning until the end.’
— Reading Group Choices

‘In Umami, language itself is a character. The talents of Sophie Hughes are displayed in Marina’s constant wordplay which comes alive in her sensitive and playful translation. Jufresa’s talent for neologism and her inventive structure give the novel a lightness of touch that never undermines its revelations, but rather enhances them.’
— Culture Trip

'This book is such a gentle and sensitive deep dive into the cycles of mourning and loss out of which families are made and unmade, terrifying and uncanny, without ever losing sight of the daily banalities of hearth and home and love. Cooked to perfection, ready to serve.’
— Literary Hub

‘Grief, though, is neither defined by culture nor constrained by time. Yes, Jufresa could have written Umami the “normal” way – a single perspective in chronological order with first person the whole way through – instead of this backwards telescope, alternating voices and switching perspectives between first and close third. That version of Umami would be a dark, bitter thing, like molasses in the coffee grounds. Instead, Jufresa and Hughes offer a version that is complex without weight, a saffron purée. Dynamic and delicate, Umami draws our attention without pretense.’

‘Jufresa directly appeals to any reader who was once a 12-year-old girl obsessed with Agatha Christie (*cough* me), but also, and truly, this is a gorgeous book that meditates on loss and grief, healing and redemption, and also offers an enchanting look into life in contemporary Mexico.’
— Nylon Magazine

‘A tale of five lives in one block in Mexico City’s inner city – in a complex designed with human tastebuds in mind – this sad and funny novel has already snagged awards, and was dubbed an “international hot property” by PW when the English rights were sold.’
— Flavorwire

‘Presents an evocative and sensory insight to its central American setting…The five voices and the jumpy timeline require a little patience, but perseverance pays off’.
— St John's Wood Magazine

‘Fans of contemporary literature are in for a treat’.
— Press Association

‘Reading Umami is like traveling through the minds of everyone we know, guided by a soft, reliable voice that tells us: stop, listen, observe.’


— Valeria Luiselli, author of The Story of My Teeth

‘A wonderfully surprising novel, powered by wit, exuberance and nostalgia.’
— Chloe Aridjis, author of Book of Clouds and Asunder

‘Umami’s style is whimsical and inventive…[it]’s heart, charm and originality are a welcome addition to Mexican literature’.
— Emerald Street

'This book was one of my favorites this year'
— Remezcla website

'Jufresa, an extremely talented young writer, deploys multiple narrators, giving each a chance to recount their personal histories, and the questions they’re still asking. Panoramic, affecting, and funny, these narratives entwine to weave a unique portrait of present-day Mexico. '
— The Millions

Laia Jufresa was born in Mexico City. Laia’s work has been featured in several anthologies and magazines such as Letras Libres, Pen Atlas, Words Without Borders and McSweeney's, and she was named one of the most outstanding young writers in Mexico as part of the project Mexico20. In 2015 she was invited by the British Council to be the first ever International Writer in Residence at the Hay Festival of Literature. She currently lives in Cologne, Germany.

Sophie Hughes is a literary translator and editor living in Mexico City.
Loading...
or
Not Currently Available for Direct Purchase