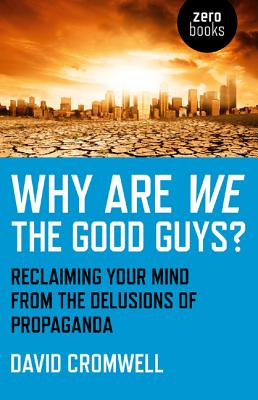 Why Are We the Good Guys?

Reclaiming Your Mind from the Delusions of Propaganda

One of the unspoken assumptions of the Western world is that we are great defenders of human rights, a free press and the benefits of market economics. Mistakes might be made along the way, perhaps even tragic errors of judgement such as the 2003 invasion of Iraq. But the prevailing view is that the West is essentially a force for good in the wider world. Why Are We The Good Guys? is a provocative challenge of this false ideology. David Cromwell digs beneath standard accounts of crucial issues such as foreign policy, climate change and the constant struggle between state-corporate power and genuine democracy. The powerful evidence-based analysis of current affairs is leavened by some of the formative experiences that led the author to question the basic myth of Western benevolence: from schoolroom experiments in democracy, exposure to radical ideas at home, and a mercy mission while at sea; to an unexpected encounter with former Foreign Secretary Robin Cook, the struggles to publish hard-hitting journalism, and the founding of Media Lens in 2001.

David Cromwell lives in Southampton and works full-time as co-editor of Media Lens, a UK-based media analysis website, which he co-founded in 2001. In 2007, Media Lens received the Gandhi Foundation International Peace Award. David is also the co-founder of the Crisis Forum which he set up with a colleague at the University of Southampton. David has a PhD (1987) in solar physics from the University of Glasgow. Following postdoctoral research in Boulder, Colorado, and a four-year stint working for Shell in the Netherlands, David returned to the UK in 1993. In 2010, he left his research position at the National Oceanography Centre, Southampton, to work full-time on Media Lens.
Loading...
or
Not Currently Available for Direct Purchase