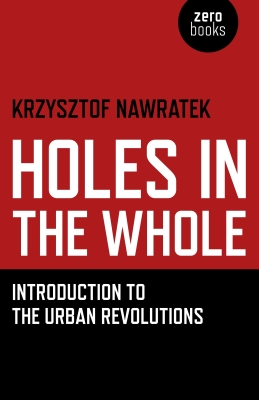 Holes in the Whole

Introduction to the Urban Revolutions

'Holes in The Whole' seeks meaning and reasons for the existence of the city. It demonstrates the urgent need to expand the sphere of urban activity - to define the city not only as a territory of exploitation, but as space of human existence in its fullest dimension. The book defines the conditions under which the city can develop as an entity without falling into the trap of arrogant self-sufficiency. It identifies the mechanisms that promote independent fragments, including people, neighbourhoods and regions, so that they are not random, unsystematic bunches, but stable (yet flexible) structures.

Dr. Krzysztof Nawratek: lecturer in Architecture, M.Arch and M.A. in Architecture programme leader at Plymouth University. Educated as an architect and urban planner, worked in Poland, Latvia (e.g. for Riga City Council) and Ireland (Principal Urban Designer at Colin Buchanan, Dublin). Krzysztof worked as a Visiting Professor at the Geography Department at the University of Latvia and as a researcher at National Institute for Regional and Spatial Analysis, Maynooth, Ireland. Member of Board of Experts European Prize for Urban Public Space 2012 and member of selection panel for the Polish contribution to the 13th International Architecture Biennial in Venice in 2012. Krzysztof is an urban theorist, author of 'City as a political idea' (Plymouth 2011) and several papers and chapters in edited books.
Loading...
or
Not Currently Available for Direct Purchase