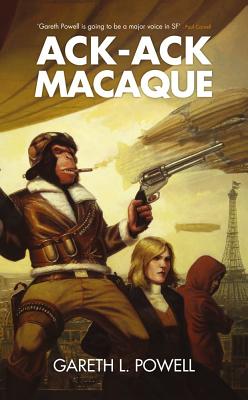 Startling, fast-paced SF from one of the most striking new voices. A cigar-chomping monkey, nuclear-powered Zeppelins, electronic souls and a battle to avert armageddon.

In 1944, as waves of German ninjas parachute into Kent, Britain's best hopes for victory lie with a Spitfire pilot codenamed 'Ack-Ack Macaque'. The trouble is, Ack-Ack Macaque is a cynical, one-eyed, cigar-chomping monkey, and he's starting to doubt everything, including his own existence.

A century later, in a world where France and Great Britain merged in the late 1950s and nuclear-powered Zeppelins encircle the globe, ex-journalist Victoria Valois finds herself drawn into a deadly game of cat and mouse with the man who butchered her husband and stole her electronic soul. Meanwhile, in Paris, after taking part in an illegal break-in at a research laboratory, the heir to the British throne goes on the run.

And all the while, the doomsday clock ticks towards Armageddon.

Gareth L. Powell was born in Bristol in 1970 and still lives nearby. He began writing at school and sold his first professional short story to Interzone magazine in 2006. He has written many novels, including the Embers of War series, the Ack-Ack Macaque trilogy, and the standalone novels The Recollection and Silversands. He has also written two short story collections, the horror novella Ragged Alice, and the nonfiction guide, About Writing. Powell’s novels have twice won the British Science Fiction Association Award for Best Novel and been finalists for both the Locus Award in the US and the Seiun Award in Japan.
Loading...
or
Not Currently Available for Direct Purchase