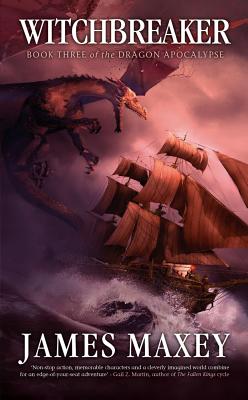 Book Three in the stunning Dragon Apocalypse Trilogy Five hundred years ago, the famed Witchbreaker, Lord Stark Tower, launched a war against the cult of witches, nearly wiping them out. Today, only a handful of women still practice the craft in secret. A young witch named Sorrow has dedicated her life to changing this reality, vowing to wipe out the Church of the Book and launch a new golden age of witchcraft. In pursuit of her goals, she bonds her soul with Rott, the primal dragon of decay, giving her nearly limitless powers of destruction. Unfortunately, tapping this power comes at the cost of her humanity, leading her into a desperate quest to find the greatest witch of all time, Avaris, in hopes of mastering her dark magic before it destroys her. But she's not alone in hunting Avaris, as fate throws her into an uneasy partnership with a man who wants to be the new Witchbreaker. Can either of them survive their mutual quests when their journey leads them into battle with Tempest, the primal dragon of storms?

James Maxey's stories have appeared in a score of anthologies and magazines. The best of his short fiction is now available in the collection There is No Wheel. He continues to write about ghosts and pirates, also spaceships, monkeys, and circus freaks and other geeky delights. His novels currently in print are the cult-classic superhero tale Nobody Gets The Girl and the Dragon Age trilogy of Bitterwood, Dragonforge, and Dragonseed. Orson Scott Card praised Bitterwood, currently in its fourth printing, as '...a book that feels like fantasy but is, at core, smart science fiction. It feels like -- and is -- a magnificent hero story.' For more information on James and the Dragon Apocalypse, visit dragonprophet.blogspot.com.
Loading...
or
Not Currently Available for Direct Purchase