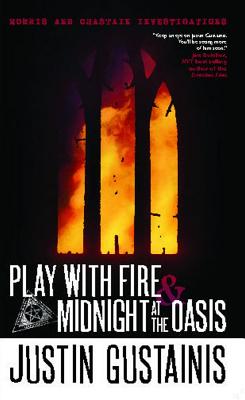 Play with Fire & Midnight at the Oasis

In Play With Fire houses of worship are burning around the U.S. From churches, to synagogues, to mosques. Usually while the places are full of people. Initially dismissed as random acts of violence, Morris and Chastain uncover the deadly meaning behind the fires, and the terrifying cause they seek to serve.
In Midnight at the Oasis Middle Eastern terrorists have conjured a deadly djin that will lay waste to America -- unless Morris and Chastain can stop it first.

Justin Gustainis was born in Pennsylvania in 1951. Following military service, he held a variety of jobs, including speechwriter and professional bodyguard, before earning a PhD at Bowling Green State University in Ohio. Mr Gustainis currently lives in Plattsburgh, New York. He is a Professor of Communication at Plattsburgh State University. He is also the author of several noir-tinged urban fantasies featuring investigator Quincey Morris. JustinGustainisCom.com
or support indie stores by buying on
(This book is on backorder)