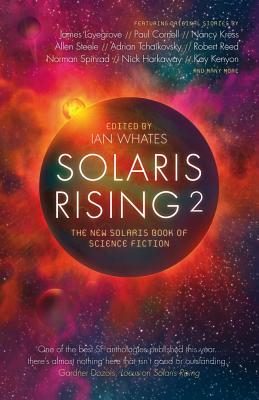 Solaris Rising 2 showcases the finest new science fiction from both celebrated authors and the most exciting of emerging writers. Following in the footsteps of the critically-acclaimed first volume, editor Ian Whates has once again gathered together a plethora of thrilling and daring talent. Within you will find unexplored frontiers as well as many of the central themes of the genre – alien worlds, time travel, artificial intelligence – made entirely new in the telling. The authors here prove once again why SF continues to be the most innovative, satisfying, and downright exciting genre of all.

James Lovegrove is the author of nearly 60 books, including the New York Times bestselling Pantheon series, the Redlaw novels and the Dev Harmer Missions. He has produced five Sherlock Holmes novels and a Conan Doyle/Lovecraft mashup trilogy, The Cthulhu Casebooks. He has also written tie-in novels for the TV show Firefly. James has sold well over 50 short stories and published two collections, Imagined Slights and Diversifications. He has produced a dozen short books for readers with reading difficulties, and a four-volume fantasy saga for teenagers, The Clouded World, under the pseudonym Jay Amory. James has been shortlisted for numerous awards, including the Arthur C. Clarke Award, the John W. Campbell Memorial Award, the Bram Stoker Award, the British Fantasy Society Award and the Manchester Book Award. His short story “Carry The Moon In My Pocket” won the 2011 Seiun Award in Japan for Best Translated Short Story. His work has been translated into fifteen languages, and his journalism has appeared in periodicals as diverse as Literary Review, Interzone, BBC MindGames, All About History and Comic Heroes. He contributes a regular fiction-review column to the Financial Times and lives with his wife, two sons and tiny dog in Eastbourne.
Loading...
or
Not Currently Available for Direct Purchase