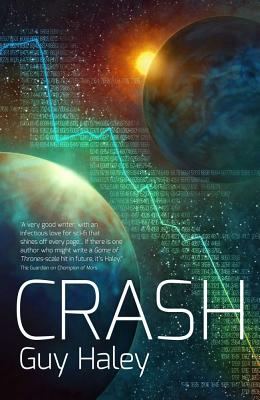 The 0.01% have decided Earth is history

Dariusz is an engineer whose career ended years ago; now, a man he’s never met sits in a bar that doesn’t exist and offers him a fresh start... at a price. Cassandra – ‘Sand,’ to her friends – is a space pilot, who itches to get her hands on the controls and actually fly a ship, rather than watch computers do it for her.

The ‘Pointers’ – the elite 0.01% who control virtually all wealth – have seen the limitations of a plundered Earth and set their eyes on the stars. And now Dariusz and Sand, and a half-million ambitious men and women just like them, are sent out to extend the Pointers’ and the Market’s influence across the galaxy.

But the colony fleet is sabotaged and the ESS Adam Mickiewicz crashes, on an alien planet where one hemisphere is seared by perpetual daylight and the other shrouded in eternal night. The castaways have the chance to create society from scratch... if they're not destroyed by the hostile planet – or their own leaders – before they can even begin.

Guy Haley is a hidden gem of British SF.' Paul Cornell 'It's a thriller, an unnatural mystery and a strange sort of love story. Highly entertaining and original, and well worth a look.' Starburst Magazine on Champion of Mars

Guy Haley is an experienced science-fiction journalist, writer and magazine editor. He has been editor of White Dwarf and Death Ray, among other magazines, and deputy editor of SFX. He is the author of the Richards and Klein series from Angry Robot, and two novels – Crash and Champion of Mars – for Solaris, and writes for Games Workshop’s Black Library. He lives in Bath.
Loading...
or
Not Currently Available for Direct Purchase