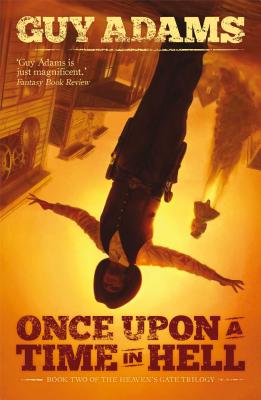 Once Upon a Time in Hell

Book two of The Heaven's Gate Trilogy. A weird western, a gun-toting, cigarrillo-chewing fantasy built from hangman’s rope and spent bullets. The west has never been wilder. A Steampunk-Western-Fantasy from Guy Adams.

"Heaven? Hell? There's no difference. Angels, demons, we're all a bit of both. This could be the most wondrous place you ever experience or so terrifying it makes you pray for death. Not that death would help you of course, there's no escape from here…"

Wormwood has appeared and for twenty four hours the gateway to the afterlife is wide open. But just because a door is open doesn't mean you should step through it…

Those who have travelled to reach the town are realising that the challenges they've already faced were nothing compared to what lies ahead. The afterlife has an agenda of its own and with scheming on both sides of reality, the revelations to come may change the world forever.

Guy Adams trained and worked as an actor for twelve years before becoming a full-time writer. If nothing else this proves he has no concept of a sensible career. He mugged someone on Emmerdale, performed a dance routine as Hitler, and spent eighteen months touring his own comedy material around clubs and theatres. He is the author of the bestselling Rules of Modern Policing: 1973 Edition, a spoof police manual ‘written by’ DCI Gene Hunt of Life On Mars. Published by Transworld, it has sold over 120,000 copies. Guy has also written a two-volume series companion to the show published by Simon & Schuster; a Torchwood novel, The House That Jack Built (BBC Books); and The Case Notes of Sherlock Holmes, a fictional facsimile of a scrapbook kept by Doctor John Watson. Carlton Books published it in 2009 in association with the Estate of Sir Arthur Conan Doyle, to celebrate the 150th anniversary of the writer’s birth.
Loading...
or
Not Currently Available for Direct Purchase