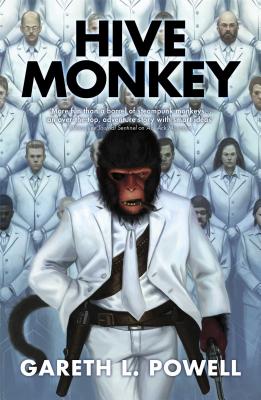 In order to hide from his unwanted fame as the spitfire-pilot-monkey who emerged from a computer game to defeat the nefarious corporation that engineered him, the charismatic and dangerous Ack-Ack Macaque is working as a pilot on a world-circling nuclear-powered Zeppelin.

But when the cabin of one of his passengers is invaded by the passenger’s own dying doppelganger, our hirsute hero finds himself thrust into another race to save the world – this time from an aggressive hive mind, time-hopping saboteurs, and an army of homicidal Neanderthal assassins!

"Hive Monkey is a highly enjoyable romp with page-turning action spread over forty chapters and has a penchant for the surprising narrative twist...File under: More. Monkey. Magic." -- Interzone

Gareth L. Powell has written nine novels, including the Embers of War trilogy and the Ack-Ack Macaque series, as well as somehow finding the time to produce two short story collections, the nonfiction guide About Writing, and the novellas Ragged Alice, Downdraught, and Light Chaser (co-written with Peter F. Hamilton). He has twice won the British Science Fiction Association Award for Best Novel and been finalist for both the Locus and Seiun Awards.
Loading...
or
Not Currently Available for Direct Purchase