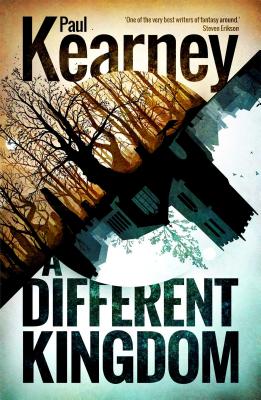 A different kingdom of wolves, woods and stranger, darker, creatures lies in wait for Michael Fay in the woods at the bottom of his family's farm.

Michael Fay is a normal boy, living with his grandparents on their family farm in rural Ireland. In the woods there are wolves; and other things, dangerous things. He doesn&'t tell his family, not even his Aunt Rose, his closest friend.

And then, as Michael wanders through the trees, he finds himself in the Other Place. There are strange people, and monsters, and a girl called Cat.

When the wolves follow him from the Other Place to his family's doorstep, Michael must choose between locking the doors and looking away; or following Cat on an adventure that may take an entire lifetime in the Other Place.

"I love this book...Paul Kearney's plain but poised prose makes this majestic fantasy in the Mythago Wood mould all the more magical. A Different Kingdom remains 'a tale [...] worthy of savouring. It is a thing to be embroidered and dived into. It is a thing to be mined and smelted and reforged with every telling.' I can only hope this edition reaches the leagues of new readers it rates." Tor.com

Paul Kearney was born in Northern Ireland. He studied Old Norse, Middle English and Anglo Saxon at Oxford University, and subsequently lived for several years in both Denmark and the United States. His first novel was published at the age of 25 in 1992. He has been a professional writer ever since. He lives in County Down, in a croft with a boat by the door.
Loading...
or
Not Currently Available for Direct Purchase