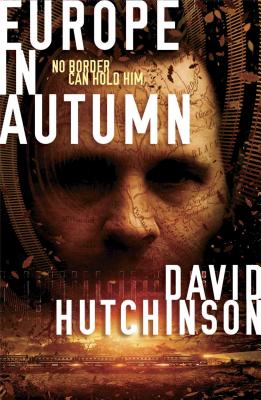 Europe in Autumn is a thriller of espionage and the future which reads like the love child of John le Carré and Franz Kafka.

Europe as we know it is gone.

Devastated by a flu pandemic and crippled by economic collapse, the continent has fractured into countless tiny nations, a fragile web of shifting alliances seething with espionage and strange new technologies.

In a small restaurant in Krakow, chef Rudi is drawn into a new career with Les Coureurs des Bois, a shadowy organisation that will move anything across any state line – for a price.

Soon, Rudi is in a world of high-risk smuggling operations, where kidnappings and double-crosses are as natural as a map that constantly redraws itself.

Dave Hutchinson was born in Sheffield. After reading American Studies at the University of Nottingham, he became a journalist. He’s the author of five collections of short stories and one novel, and his novella The Push was shortlisted for the 2010 BSFA award for short fiction. He has also edited two anthologies and co-edited a third. His short story The Incredible Exploding Man featured in the first Solaris Rising anthology, and appeared in the Year’s Best Science Fiction collection. The Fractured Europe Sequence has been nominted for multiple awards including the Arthur C. Clarke Award, the John W. Campbell Memorial Award, and The British Science Fiction Award. He lives in north London with his wife and several cats.

Praise For Europe In Autumn…

Europe in Autumn is the work of a consummate storyteller and combines great characters, a cracking central idea, and a plot that will keep you on the edge of your seat. Excellent.
— Eric Brown, author of Helix
or
Not Currently Available for Direct Purchase
Copyright © 2020 American Booksellers Association