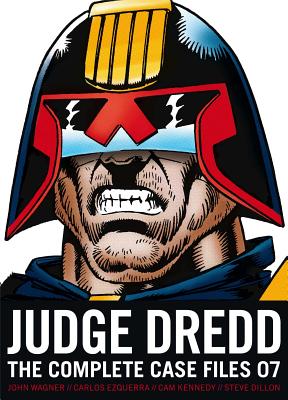 The Complete Case Files series is a chronological collection of all of Judge Dredd's adventures. Another bumper crop of cases for Dredd in this action-packed volume, collecting together some of the very best in 2000 AD thrills Stories include the full-blooded horror of Cry of The Werewolf, illustrated by comics legend Steve Dillon (Preacher) and the return of the fatties in Requiem For A Heavyweight, illustrated by Dredd co-creator Carlos Ezquerra.

John Wagner has been scripting for 2000 AD for more years than he cares to remember. His creations include Judge Dredd, Strontium Dog, Ace Trucking, Al's Baby, Button Man, and Mean Machine. Outside of 2000 AD his credits include Star Wars, Lobo, The Punisher and the critically-acclaimed A History of Violence. With well over 300 2000 AD stories to his name - not to mention over 250 daily newspaper Judge Dredd strips - Alan Grant's prolific creative record speaks for itself. Outside the Galaxy's Greatest Comic, Grant is well-known to Batman fans following a lengthy run on various incarnations of the title, as well as his work on Lobo, Tank Girl and The Terminator. He has also adapted Robert Louis Stevenson's classic novels Kidnapped and Doctor Jekyll and Mr Hyde in Graphic Novel format with artist Cam Kennedy. His television work includes scripts for the BBC series Ace Lightning and the Carnival of Doom. Steve Dillon is a fan-favourite 2000 AD writer and artist, and the creator of both Hap Hazzard and the Irish Judge Joyce. His writing for the Galaxy's Greatest Comic includes Future Shocks and Rogue Trooper, while Dillon's pencils have graced A.B.C. Warriors, Bad Company, Judge Dredd, Harlem Heroes, Ro-Busters, Rogue Trooper and Tyranny Rex. Dillon shot to international superstardom as a result of his work on DC/Vertigo's Preacher, co-created with 2000 AD's Garth Ennis, but he has also worked on A1, Animal Man, Captain Britain, Deadline, Hellblazer and Punisher. As co-creator of Judge Dredd, Carlos Ezquerra designed the classic original costume as well as visually conceptualising Mega-City One. He also co-created Strontium Dog. He has also illustrated A.B.C. Warriors, Judge Anderson, Tharg the Mighty, Al's Baby and Cursed Earth Koburn amongst many others. Outside of the 'Galaxy's Greatest Comic', Ezquerra first illustrated Third World War in Crisis magazine, and has since become a regular collaborator with Garth Ennis, working on Adventures in the Rifle Brigade, Bloody Mary, Just a Pilgrim, Condors and The Magnificent Kevin. He also pencilled two special Preacher episodes.
Loading...
or support indie stores by buying on