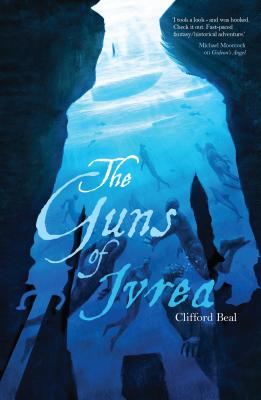 The Guns of Ivrea

A swashbuckling new sea-faring fantasy series begins! A gritty, thrilling epic that reads like a cross between Patrick O'Brian and George R.R. Martin, bringing together the tang of the sea and the taste of cold steel.

Acquel Galenus, former thief and now monk of no particular skill, indifferent scribe and even worse chorister, uncovers a terrible secret under the Great Temple at Livorna that could shiver the one faith to its core. A secret that could get him killed. A secret that could enable an older, more sinister form of worship to be reborn...

Pirate princeling Nicolo Danamis, mercenary to the King and captain of the largest fleet in the island kingdom of Valdur, has made one deal too many, and enemies are now closing in to destroy him.

And Citala, fair-haired and grey-skinned, the daughter of the chieftain of the Merfolk who inhabit the waters of Valdur, finds herself implacably drawn to the affairs of men. She puts events in motion that will end her people's years of isolation but that could imperil their very existence...

All their fates will intertwine as they journey through duchies and free cities riven by political intrigue, religious fervour, and ancient hatreds. Alliances are being forged anew and after decades of wary peace, war is on the wind once again...

Praise For The Guns of Ivrea…

“An excellently gripping story of thievery, betrayal,piracy, and adventure… a fantastic and satisfying read.”
— SciFiNow

“A cracking piece of salty fun. If you're a fan of Michael Moorcock and Fritz Lieber, you will most likely love Clifford Beal. The Guns of Ivrea proves that Beal can deliver addictive, page turning, pulp which also happens to have fun characters and nifty world building.”
— Starburst

“Clifford Beal’s novel will suit those who want somethingsomewhere in the middle of Scott Lynch’s Red Seas Under Red Skies and GeorgeR.R. Martin’s A Game of Thrones. A highly readable, fast-paced, fun adventurenovel that somehow manages to be all of that without ever sacrificing oncharacter development, authentic descriptions, and vivid worldbuilding… greatreading that will keep you guessing until the very end.”
— Fantasy Faction

“Beginning with a deadly temple secret and leading into apirate rebellion, Clifford Beal proves you can’t go wrong with a heavy dose ofadventure and intrigue. From sea battles to subtle mental tricks, the fightsare played out in many different ways and end with the promise of more.”
— Mazarkis Williams

Clifford Beal, an international journalist for 20 years, is a Fellow of the Royal Aeronautical Society, and was the editor-in-chief of Jane’s Defence Weekly in London before turning his attention to writing history, historical fiction and epic fantasy. Over the years he has been flung about in military aircraft, fought in full medieval armour, trained in 17th century rapier combat, fired flintlock pistols, messed about in boats, and ridden both horses and motorcycles. When not writing and imbibing endless mugs of tea he is reading and imbibing endless mugs of tea. He lives in Surrey, England, with a fiery redhead of a wife and a Boston Terrier named Buzz. You can follow his blog at cliffordbeal.com and on Twitter @clifford_beal
Loading...
or
Not Currently Available for Direct Purchase