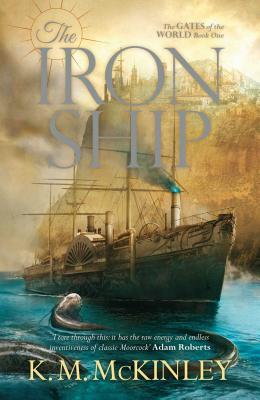 The Iron Ship (The Gates of the World #1)

Merchant, industrialist and explorer Trassan Kressind has an audacious plan – combining the might of magic and iron in the heart of a great ship to navigate an uncrossed ocean, seeking the city of the extinct Morfaan to uncover the secrets of their lost sciences.

Ambition runs strongly in the Kressind family, and for each of Trassan’s siblings fate beckons. Soldier Rel is banished to a vital frontier, bureaucrat Garten balances responsibility with family loyalty, sister Katriona is determined to carve herself a place in a world of men, outcast Guis struggles to contain the energies of his soul, while priest Aarin dabbles in forbidden sorcery. The world is in turmoil as new money brings new power, and the old social order crumbles. And as mankind’s arts grow stronger, a terror from the ancient past awakens...

This highly original fantasy depicts a unique world, where tired gods walk industrial streets and the tide’s rise and fall is extreme enough to swamp continents. Magic collides with science to create a rich backdrop for intrigue and adventure in the opening book of this epic saga.

K. M. McInley resides near Inverness, in Scotland, not too far from Loch Ness, but not too close either. You never know what's going to come out of the water.
Loading...
or
Not Currently Available for Direct Purchase