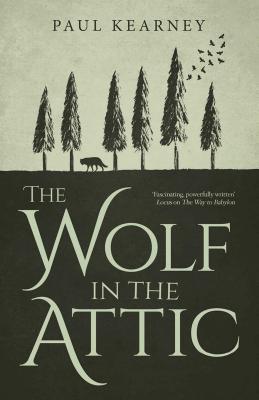 The Wolf in the Attic (Paperback)

A novel that will enchant readers of J.R.R. Tolkien, C.S. Lewis and Philip Pullman. The fantastical appears in the middle of 1920's Oxford as a young refugee looking to escape her grim reality rubs shoulders with two of the founding fathers of modern fantasy, Tolkien and Lewis. 1920s Oxford: home to C.S. Lewis, J.R.R. Tolkien... and Anna Francis, a young Greek refugee looking to escape the grim reality of her new life. The night they cross paths, none suspect the fantastic world at work around them. Anna Francis lives in a tall old house with her father and her doll Penelope. She is a refugee, a piece of flotsam washed up in England by the tides of the Great War and the chaos that trailed in its wake. Once upon a time, she had a mother and a brother, and they all lived together in the most beautiful city in the world, by the shores of Homer's wine-dark sea. But that is all gone now, and only to her doll does she ever speak of it, because her father cannot bear to hear. She sits in the shadows of the tall house and watches the rain on the windows, creating worlds for herself to fill out the loneliness. The house becomes her own little kingdom, an island full of dreams and half-forgotten memories. And then one winter day, she finds an interloper in the topmost, dustiest attic of the house. A boy named Luca with yellow eyes, who is as alone in the world as she is. That day, she'll lose everything in her life, and find the only real friend she may ever know.

Paul Kearney was born in Northern Ireland. He studied Old Norse, Middle English and Anglo Saxon at Oxford University, and subsequently lived for several years in both Denmark and the United States. He lives in County Down, in a croft with a boat by the door.
or
Not Currently Available for Direct Purchase
Copyright © 2020 American Booksellers Association