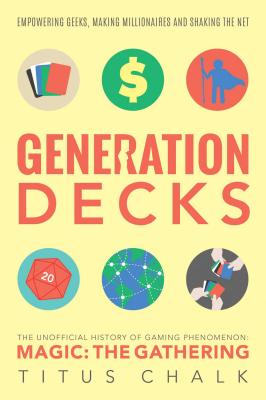 The Unofficial History of Gaming Phenomenon Magic: The Gathering

The incredible true story behind the global gaming phenomenon! Generation Decks tells the story of the mould-breaking fantasy card game Magic: The Gathering. The brainchild of misfit maths genius Richard Garfield, Magic combines fiendishly complex gameplay with collectability. When it came out in the early '90s it transformed the lives of gamers who had longed for a game that combined challenging mechanics and kick-ass artwork with a chance to connect and compete with likeminded people.

Titus Chalk's tale is part biography, charting the author's own relationship with the game, part history, and part love letter to the card game that made it cool to be a geek. Prepare to meet Generation Decks, a community like no other...

Praise For Generation Decks: The Unofficial History of Gaming Phenomenon Magic: The Gathering…

It was a pleasure to read this well researched book and get back in touch with the game design world from the '90s--Richard Garfield "Game designer and creator of Magic: The Gathering " Who doesn't love a story about small town dreamers who make it big? A gripping tale with a journalistic eye for how fast fortunes, and the world, changes.--Samira Ahmed "Culture journalist and presenter of BBC Radio 4's Front Row " After reading Generation Decks, I fell even more in love with the game.--Jonathan Little "Professional poker player and author "

Titus Chalk is a freelance journalist based in Berlin, Germany. He writes and broadcasts about sport, culture, and games for outlets including Deutsche Welle, Tagesspiegel, and FourFourTwo. He has been playing Magic since Revised Edition and even occasionally wins. He is on the wrong side of 30, but coping, thank you.
Loading...
or support indie stores by buying on