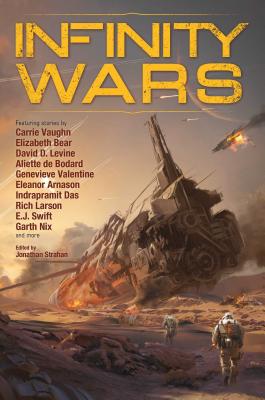 We have always fought. War is the furnace that forges new technologies and pushes humanity ever onward. We are the children of a battle that began with fists and sticks, and ended on the brink of atomic Armageddon. Beyond here lies another war, infinite in scope and scale.

But who will fight the wars of tomorrow? Join Elizabeth Bear, Indrapramit Das, Aliette de Bodard, Garth Nix and many, many more in an exploration of the furthest extremes of military science fiction…

Carrie Vaughn’s (www.carrievaughn.com) work includes the Philip K. Dick Award winning novel Bannerless, the New York Times Bestselling Kitty Norville urban fantasy series, over 20 novels and upwards of 100 short stories, two of which have been finalists for the Hugo Award. Her most recent work includes a pair of novellas about Robin Hood’s children, The Ghosts of Sherwood and The Heirs of Locksley. She’s a contributor to the Wild Cards series of shared world superhero books edited by George R. R. Martin and a graduate of the Odyssey Fantasy Writing Workshop. An Air Force brat, she survived her nomadic childhood and managed to put down roots in Boulder, Colorado.

Indrapramit Das (aka Indra Das) is a writer from Kolkata, India. He is a Lambda Literary Award-winner for his debut novel, The Devourers (Penguin India / Del Rey), and has been a finalist for the Crawford, Tiptree and Shirley Jackson Awards. He is an Octavia E. Butler Scholar and a grateful graduate of Clarion West 2012. He has lived in India, the United States, and Canada, where he completed his MFA at the University of British Columbia.

E. J. Swift is the author of the Osiris Project trilogy (Osiris, Cataveiro and Tamaruq), a speculative fiction series set in a world radically altered by climate change. Her short fiction has been nominated for the Sunday Times EFG Short Story Award (“The Spiders of Stockholm”) and the BSFA award for short fiction (“Saga’s Children”), and has appeared in a variety of publications from Solaris, Salt Publishing, NewCon Press and Jurassic London. Swift also contributed to Strata – an interactive digital project by Penguin Random House.
Loading...
or
Not Currently Available for Direct Purchase