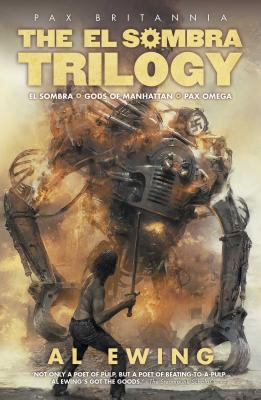 THIS IS THE GREATEST STORY EVER TOLD In the quiet Mexican town of Pasito, the future is born. A man dies; a fool and braggart, best forgotten. In his stead, a legend arises: the man in the bloodstained mask, the Saint of Ghosts. El Sombra Yearning for justice against the Nazis that plundered his home, El Sombra will cut a swath across the world. He will hunt his enemy to the streets of Manhattan - home of the mighty Doc Thunder, the terrible Blood Spider, and all the monsters and gods who fight beside them - and finally into the heart of the Ultimate Reich itself Thrill at the legend Follow a story as vast as the whole world, from the beginning of the human race to the end of the time itself He defies man He defies death Nothing can stop him VIVA EL SOMBRA Collecting the three novels: El Sombra, Gods of Manhattan and Pax Omega.

Al Ewing is a British novelist and American comic book writer, currently responsible for much of Marvel Comics' Avengers titles. He came to prominence with the #1 UK comic 2000 AD and then wrote a sequence of novels for Abaddon, of which the El Sombra books are the most celebrated, before becomiing the regular writer for Doctor Who: The Eleventh Doctor and a leading Marvel writer. He lives in York, England.
or
Not Currently Available for Direct Purchase
Copyright © 2020 American Booksellers Association