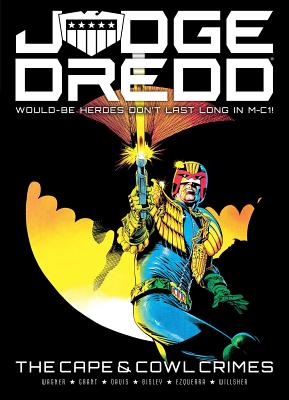 The Cape and Cowl Crimes

COSTUMES ARE FOR CREEPS! From super-powered aliens to Cursed Earth mutants, Judge Dredd dishes out justice to all in this action-packed collection of stories from some of comic's biggest talents, including John Wagner, Alan Grant, Carlos Ezquerra, Mike Collins, Alan Davis, Simon Bisley, Richard Elson, Simon Spurrier and Eric Powell, amongst many others.

Welcome to Mega-City One, a nightmarish metropolis situated along the east coast of post-apocalyptic North America. Poverty is rife, crime is rampant, and only the Judges – empowered to dispense instant justice – can stop total anarchy. Toughest of them all is JUDGE DREDD – he is the Law!

There are plenty of law-breaking freaks amongst the citizenship of the ‘Big Meg’. From Futsies to Umpty-baggers, the Judges have their hands full. But the worst offenders are those who try and enforce their own brand of justice. Especially that strange strain of vigilante who chooses to hit the streets in brightly-coloured spandex!

Pat Mills’ writing and editorial career started in Dundee, working for D.C. Thomson on the teenage romance magazine Romeo. Later Mills went freelance and started a long relationship with IPC Magazines, initially writing for girl’s titles like Tammy, Pink and Sandy. He was an assistant editor on Tammy, the publication which began the comic revolution. Then, with Malcolm Shaw, he did some preliminary work devising Jinty before moving over to rejuvenate boy’s comics. He created Battle (with John Wagner), Action, Misty and 2000 AD (featuring Judge Dredd). Other notable works include Marshal Law, Third World War in Crisis, the title series for Doctor Who Weekly and Requiem Vampire Knight. He has also recently written several books including Be Pure! Be Vigilant! Behave!, a history of 2000 AD and Serial Killer with artist Kevin O’ Neill, a darkly comedic thriller.
or
Not Currently Available for Direct Purchase