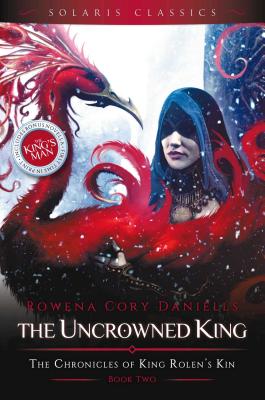 The second volume in the classic fantasy series, The Chronicles of King Rolen's Kin, is now re-issued in a stunning new trade paperback edition. Includes the exclusive first-printing of The King's Man novella Thirteen year old Piro watches powerless as her father's enemies march on his castle. A traitor whispers poison in the King's ear, undermining his trust in her brother, Byren. Determined to prove his loyalty, Byren races across the path
of the advancing army, towards the Abbey. Somehow, he must get there in time to convince the Abbot to send his warriors to defend the castle. Meanwhile, the youngest of King Rolen's sons, Fyn, has barely begun his training as an Abbey mystic, but he wakes in a cold sweat, haunted by dreams of betrayal... Also includes the bonus novella, never before seen in print, The King's Man When Dovecote estate fell, Garzik, younger son of Lord Dovecote, was captured and sent back to Merofynia as a prize of war. Feeling responsible for the fall of his father's estate - and therefore, ultimately, the fall of the Kingdom of Rolencia - Garzik must set things right before he can return home. He decides to turn his misfortune into opportunity, to spy for the rightful king, Byren, who yet thinks him slain at Dovecote. With fortune on his side, he may learn something that could change the path of the war, then escape, return home, find Byren and redeem himself. For Garzik is and always will be the king's man.

Rowena Corey Daniels is the renowned award-winning writer behind the The Outcast Chronicles and The Last T'en. She lives in Brisbane, Australia with her husband and children.
or support indie stores by buying on