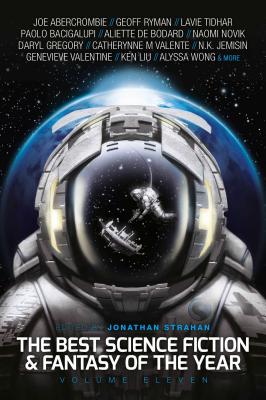 The Best Science Fiction and Fantasy of the Year, Volume Eleven

Jonathan Strahan, the award-winning and much lauded editor of many of genre’s best known anthologies is back with his 11th volume in this fascinating series, featuring the best science fiction and fantasy. With established names and new talent this diverse and ground-breaking collection will take the reader to the outer-reaches of space and the inner realms of humanity with stories of fantastical worlds and worlds that may still come to pass.

Lavie Tidhar was in Dar-es-Salaam during the American embassy bombings in 1998, and stayed in the same hotel as the Al Qaeda operatives in Nairobi. Since then he and his now-wife have narrowly avoided both the 2005 London, King’s Cross and 2004 Sinai attacks—experiences that led to the creation of Osama. He is the author of many novels, including the Bookman trilogy and is a prolific short story writer.
Loading...
or support indie stores by buying on
(This book is on backorder)