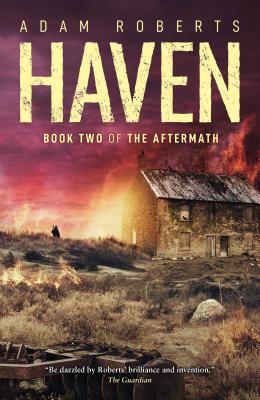 Tales Of The Aftermath

Young Forktongue Davy has visions; epilepsy, his Ma calls it. He’s barely able to help around the family farm.

But something about the lad is attracting attention: the menacing stranger who might be the angel of death himself; the women-only community at Wycombe; Daniel, sent by the mysterious Guz.

They all want Davy for their own reasons.

But what use can he be to anyone? He has visions of flight, but how can flight ever be possible in this shattered world?

A simple farmboy, caught up in events beyond his power to control—but his visions may be the key to the future.

Adam Roberts was born in London two thirds of the way through the last century. He currently lives a little way west of London and teaches English and Creative Writing at Royal Holloway, University of London. He is the author of sixteen SF novels, including New Model Army (Gollancz, 2010), Jack Glass (2012)—winner of the BSFA and Campbell awards—and Bête (2014). His most recent novel is The Thing Itself (2015). He is also the author of various works of literary criticism and review, including the recently expanded and updated History of Science Fiction (Palgrave, 2016)
Loading...
or
Not Currently Available for Direct Purchase