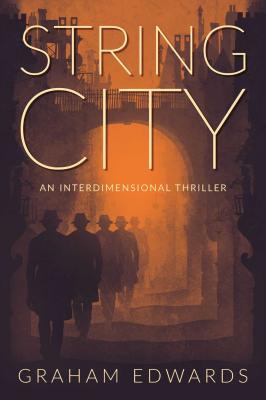 THE UNIVERSE IS MADE OF STRING. WHEN THE KNOTS TIGHTEN, THE COSMOS QUAKES.

It’s a tough job being a gumshoe in an interdimensional city full of gods, living concepts and weirder things. Good thing I’m a stringwalker, able to jump between realities.

It started when I was hired to investigate an explosion at a casino. A simple heist, I thought, but it turned into a race to stop the apocalypse. So I rolled the dice, and now I’m up against the ancient Greek Titans, an interdimensional spider god and a mysterious creature known as the Fool. I’m going to need more than just luck to solve this one.

Just another day in String City.

Graham Edwards is the critically acclaimed author of multiple novels, and short fiction, including the British Fantasy Award-shortlisted Ultimate Dragon Saga, and the Nebula Award longlisted “Girl in Pieces”, part of his String City Mysteries series.

Graham was born near Glastonbury Tor and now lives in Nottingham, and has worked as a graphic designer and animator, scriptwriter and multimedia producer for theme parks and visitor centres, and is currently senior staff writer at Cinefex magazine, the journal of cinematic illusions, where he researches and writes in-depth articles about motion picture visual effects.

“A novel with a difference. The characterisation is excellent… a strangely compelling story.”
— Starburst Magazine

“Stay with this… Edwards has strong central characters to carry the action forward… solidly written, intriguing… a superior work of fantasy.”
— SFX Magazine