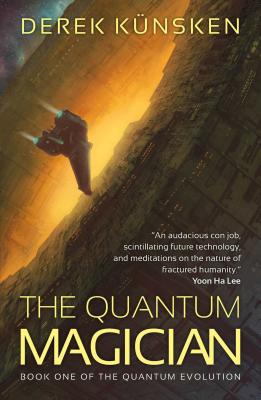 Belisarius is a Homo quantus, engineered with impossible insight. But his gift is also a curse – an uncontrollable, even suicidal drive to know, to understand. Genetically flawed, he leaves his people to find a different life, and ends up becoming the galaxy's greatest con man and thief.

But the jobs are getting too easy and his extraordinary brain is chafing at the neglect. When a client offers him untold wealth to move a squadron of secret warships across an enemy wormhole, Belisarius jumps at it.

Now he must embrace his true nature to pull off the job, alongside a crew of extraordinary men and women. If he succeeds, he could trigger an interstellar war... or the next step in human evolution.

"I have no problems raving about this book. A truly wild backdrop of space-opera with wormholes, big space-fleet conflict and empires.... what could go wrong?" -- Brad K. Horner

Derek Künsken has built genetically engineered viruses, worked with street children and refugees in Latin America, served as a Canadian diplomat, and, most importantly, taught his son about super-heroes and science. His short fiction has appeared in Analog Science Fiction and Fact, Beneath Ceaseless Skies and multiple times in Asimov’s Science Fiction. His stories have been adapted into audio podcasts, reprinted in various Year’s Best anthologies, and translated into multiple languages. They have also been short-listed for various awards, and won the Asimov’s Readers’ Award in 2013.
Loading...
or support indie stores by buying on
(This book is on backorder)