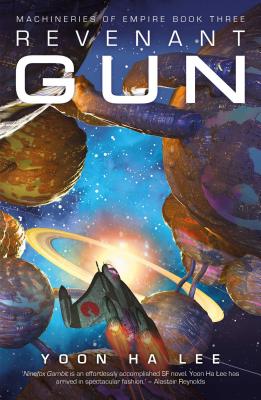 Revenant Gun (The Machineries of Empire #3)

The stunning conclusion to the mind-bending series

Shuos Jedao is awake... ...and nothing is as he remembers. He's a teenager, a cadet-a nobody-in the body of an old man; a general in command of an elite force. And he's the most feared, and reviled, man in the galaxy. Jedao carries orders from Hexarch Nirai Kujen to re-conquer the fractured pieces of the hexarchate. But he has no memory of ever being a soldier, let alone a general, and the Kel soldiers under his command hate him for a massacre he can't remember committing. Kujen's friendliness can't hide the fact that he's a tyrant. And what's worse, Jedao and Kujen are being hunted-by an enemy who knows more about Jedao than he does himself...

Praise For Revenant Gun (The Machineries of Empire #3)…

`I love Yoon's work! Full of battles and political intrigue, in a beautifully built far-future that manages to be human and alien at the same time.' -- Ann Leckie
— Ann Leckie

Yoon Ha Lee's debut novel, Ninefox Gambit, won the Locus Award for best first novel and was a finalist for the Hugo, Nebula, and Clarke awards. Its sequels, Raven Stratagem and Revenant Gun, were also Hugo finalists. His middle grade novel Dragon Pearl was a New York Times bestseller, and won the Mythopoeic Award and the Locus Award for YA. His most recent book is Tiger Honor, a companion novel to Dragon Pearl. Lee lives in Louisiana with his family and an extremely lazy cat, and has not yet been eaten by gators.
Loading...
or support indie stores by buying on