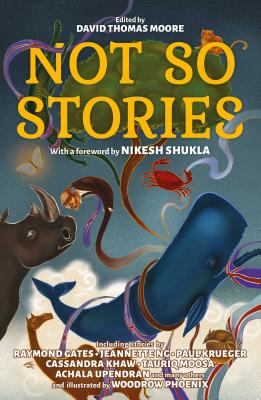 Not So Stories (Paperback)

Rudyard Kipling’s Just So Stories was one of the first true children’s books in the English language, a timeless classic that continues to delight readers to this day. Beautiful, evocative and playful, the stories of How the Whale Got His Throat or the First Letter Written paint a magical, primal world.

It’s also deeply rooted in British colonialism. Kipling saw the Empire as a benign, civilising force, and his writing can be troubling to modern readers. Not So Stores attempts to redress the balance, bringing together new and established writers of colour from around the world to take the Just So Stories back, giving voices to cultures that were long deprived them.

David Thomas Moore is the editor of Two Hundred and Twenty-One Baker Streets, alt.sherlock.holmes, Monstrous Little Voices and Dracula: Rise of the Beast. Among other hobbies, he is an enthusiastic but inexperienced Bolognese sword-and-buckler fighter. Australian by birth, he lives in the United Kingdom with his wife and daughter.

Back when she was a child, Zina Hutton once jumped out of a window to escape dance class in the Virgin Islands. Now she's an aspiring fantasy writer who tends to leap headfirst into new stories and worlds the second that inspiration strikes. Zina lives in hot and humid South Florida where she’s never far away from a notebook and her precious Kindles.  Zina currently works as a freelance editor and writer with publication credits in Fireside Fiction, The Mary Sue, Strange Horizons, ComicsAlliance and Women Write About Comics and you can find her at stitchmediamix.wordpress.com and on twitter as @stichomancery.

Georgina Kamsika is a speculative fiction writer born to Anglo-Indian immigrant parents, and has spent most of her life explaining her English first name, Polish surname and Asian features. She graduated from the Clarion West workshop in 2012, studying under a roster of instructors that included George R.R. Martin, Connie Wills and Chuck Palahniuk.

As a second-generation immigrant, her work often utilises the speculative element to examine power structures that are mirrored in the real word, touching on issues of race, class, and gender. Her current novel, The Goddess of the North, is with her agent.

Paul Krueger is the author of Last Call at the Nightshade Lounge, a novel about bartenders who fight demons with alcohol magic. He lives in Los Angeles, and can be found on Twitter at @NotLikeFreddy.

Tauriq Moosa is a contributor to the Guardian, Daily Beast and other publications. He focuses on ethics, justice, technology and pop culture. His work has been referred to by The New York Times, the Washington Post, Forbes and other places. He once debated Desmond Tutu about god.

Ali Nouraei is a Persian-British writer who blends history, philosophical debate, and cultural paradigms from East and West in his writing. He is a qualified Barrister, a practicing Mediator, and has written fiction for fifteen years. His passions include history, literature, and cake. He tweets as @AliNouraei.

Zedeck Siew used to work in Malaysian media, covering art, culture and parliament. He has written and performed for the stage; earns his keep as a translator from the Malay language; and co-designed Politiko, a card game about Malaysian party politics. He is currently working on an illustrated catalogue of imaginary Southeast Asian animals, Creatures of Near Kingdoms, out in late 2017.

Praise For Not So Stories…

"There is a lot to enjoy here. A book whose time has come..."
— Suroor Alikhan
or
Not Currently Available for Direct Purchase
Copyright © 2020 American Booksellers Association